Billy Corgan at the Electric Factory 6/25 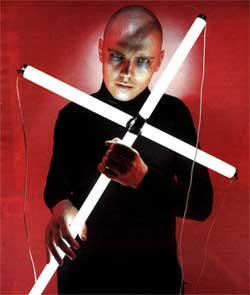 Billy Corgan played the Electric Factory June 25 and rocked! I’d been a huge fan of Smashing Pumpkins since the early ’90s but have never seen them play live, so I was quite happy to finally have the opportunity.

The news on the town is that Billy’s looking to reunite the Pumpkins. Details are scanty and he’s been oh so cryptic about what exactly he means. Yes, just a few short months ago, he declared he’d never try to reunite the band, but it should surprise no one that he’s changed his mind. With the release of his new album, The Future Embrace, on June 22, he published full page ads in Chicago newspapers requesting the band reunite. That’s Billy for you – always one to keep us on our toes. But I digress.

The Electric Factory was probably the least crowded I’ve seen it for any show. Not to say there wasn’t a lot of people there, but my last concert had been NIN and that was packed to the point where you could barely push your way over to the bar. I had no problems finding a space along the 2nd floor balcony opposite the stage this time – where I tend to gravitate because it gives you the best view of the stage (and I’m short) – but if you had preferred, you could have found space along the right side much closer without much trouble.

Anyway, the first opener for the night was The Crimea, who sucked. Skip them. Doris Henson was next, a much welcomed change from the opener, and pretty good. They had this trombone player who looked baked through most of their set list. I think everyone around me was amused by this guy, who looked as if he were about to topple over at any moment. The lead singer looked like someone out of That ’70s Show with his white pants, blue shirt, and this red and black stripped tie. He flailed about on stage, contorting his body in quick movements as he sang, and genuinely looked thrilled to be opening for Billy Corgan.

Soon, they too were finished, and the crowd waited anxiously for Billy to take stage. I will mention that between sets, they were playing older Cure stuff – a fitting selection not just because they are my favorite band, but because Robert Smith actually sings with Billy on one of the new album’s songs.

Probably a good 20 minutes later, the lights die down again, and Billy, clad in black with his black hat, and band take the stage in front of a lighted backdrop. The lights were arranged in squares, so they almost looked like large pixels flashing very techno/matrix patterns. Throughout the show I was torn between thinking “futuristic” and “retro video game.”

The instrument design matched the futuristic/techno feel. There were two keyboards and an electric drum set to accompany Billy and his guitar. As the lights flashed behind them, they looked like silhouettes playing. He never introduced the band, but one of the keyboardists was Linda Strawberry (who has been blogging her experiences on the tour at her website).

Billy looked like he was having fun on stage, often interacting with the crowd. At one point, he pulled up a sign from an audience member which read something like “birthmarks are sexy” on one side and “Stand Inside Your Love was my wedding song” on the other, to which he asked what her divorce song would be. Then the band broke out in a carousel style version of Jingle Bells which had the crowd going “wtf?”

I don’t have a full set list, mainly because I didn’t recognize all the songs. He played a bunch of new stuff from The Future Embrace, opening with Now and Then and including the Camera Eye, A100, Mina Loy (MOH), To Love Somebody, DIA, and All Things Change.

I didn’t recognize the last song before the encores, though my brother mentioned it was from of School of Rock. Some after-show googling revealed it to be an AC/DC song, “It’s A Long Way to the Top.” This song was electrifying, with pixilated lights simulating flames in the background as Billy sang. The crowd erupted and demanded they come back onstage for more.

Billy became more interactive during the encores. At one point, he asked the crowd for suggestions and when someone requested Zero, he bluntly told no and started walking off stage before breaking into a quick guitar riff. He also mentioned something to the effect of not wanting to piss off Philadelphians because they booed Santa (at an Eagles game) and that he’d pay another song so long as Philly didn’t boo Chris Webber, to which he got a mixed reply.

He ended the first encore with a Crosby, Stills and Nash song “Just a Song Before I Go” and after another ovation, finished the concert with Strayz.

Kabbalistic Interpretations of God: Ein-Sof and the Sefirot
Next Post: Sleep Paralysis: Demon Encounters and Terror in the Night