NIN at the Electric Factory 5/19

Though there were numerous sound difficulties, Trent Reznor and company still managed to pull off an amazing performance. 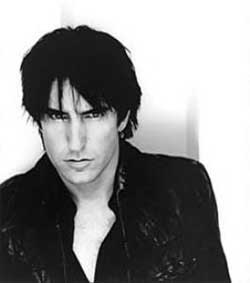 I just got back from this intense show, and while there were numerous sound difficulties, Trent Reznor and company still managed to pull off an amazing performance.

I arrived at the Electric Factory around 8PM semi interested in catching the opening band. This was my fourth NIN concert and all previous bands they played with (Marilyn Manson in 94, David Bowie in 95, and A Perfect Circle in 99) had been excellent, so I figured the Dresden Dolls must have potential if they were opening.

The Dresden Dolls are a two person band comprised of singer/keyboardist, Amanda Palmer, and drummer, Brian Viglione. Palmer reminds me of a younger, spunky Tori Amos with her powerful voice and how intensely she strides up and down the keyboard. That’s really where the similarities end, as the Dresden Dolls play more into the gothic/electronic genre rather than a girl with her piano.

The highlight of their performance was when they broke into the opening notes of Karma Police and a whisper went through the crowd as people recognized they were covering Radiohead. Jerome Dillon, the drummer of Nine Inch Nails, made a guest appearance while Brian Viglione played guitar.

Much of their original stuff is pretty good, enough so that I’m considering picking up the cd, though I wasn’t a fan of the last two songs they played, which seemed to drone on forever. Perhaps the anticipation of finally seeing Trent play after 6 years made me even more impatient. But soon their setlist was done, and they were off the stage by 8:40PM.

Nine Inch Nails opened around 9PM with The Frail into The Wretched. From the beginning, Trent’s microphone and guitar seemed to cut out during a number of songs. At first, a number of roadies scurried around the stage as the dim lights hid what they were doing, but as the night progressed and the malfunctions intensified, Trent became visibly angry.

During Reptile, he tossed his guitar, microphone and stand against the back wall and stormed around the stage for awhile, throwing water bottles at his crew. By the time they closed with Head Like a Hole, the microphone completely cut out during the chorus and Trent screamed “Something’s going to get broken!” into the microphone before tossing it. The entire crowd picked up the verse until Trent found a working mic, finished the song, and then stormed off the stage. Perhaps it’s time to switch to wireless?

Regardless, the show was still amazing, and Trent was able to channel much of his frustration and anger into the music. They played a few of the newer songs – The Hand that Feeds, The Line Begins To Blur, You Know What You Are? – mixed in with classic NIN – March of the Pigs, Piggy, Wish, Burn, Suck, Gave Up, Starfuckers Inc, The Day the World Went Away, Closer, Even Deeper, No You Don’t, Terrible Lie, The Big Come Down, and Hurt. There may have been a few others – I didn’t write down the setlist – but it was definitely focused around The Fragile.

Hurt was a nice surprise. It was the only time during the night Trent played keyboard (Alessandro Cortini was tonight’s keyboardist), so the lights dimmed and a spotlight illuminated Trent and his keyboard positioned in the dead center of the stage while he played. Unfortunately, there were a handful of assholes on the far left of the top balcony who thought that slow songs meant they should scream as loud as they could. And they did – through the whole song. This did seem to be the exception. The rest of the time, the crowd, at least around me, was into the music, singing along, and enjoying itself.

Unlike previous tours, there was no movie screen showing abstract video footage. Instead, there were four panels of six several feet high vertical lights – picture 24 extremely tall and cylindrical halogen lights lined side by side – behind the stage that were timed to the music. These repetitious strobe light effects were timed so quickly that I’m amazed no one started to seizure. Perhaps it was where I was standing – dead center on the far balcony directly opposite of the stage – but the lights were mesmerizing, switching from cool blue to fiery red in the blink of an eye and then back. When they weren’t flashing colors, there were standard white strobes flashing to the beat and adding to the intensity of the music.

Aaron North is filling in as guitarist on this tour, and he was a riot to watch. Full of energy, he was bouncing back and forth across the stage, climbing on the drum set, and I think he managed to do a head stand at one point. Jeordie White was the bassist and relatively tame comparably.

Trent didn’t speak much to the audience. Once he mentioned something about being back in Pennsylvania and that he was from the other “shittier” side, but that was about the extent of his small talk. It didn’t matter – he gave the crowd what they wanted. His anger at his sound crew filtered into the hardcore angst of his song lyrics and made the show even more powerful.

This was a great show, overall, and with an excellent setlist. If you have the chance to see NIN play, GO!