A review of their March 11, 2006 show at the Borgata Hotel and Casino in Frantic City, New Jersey. 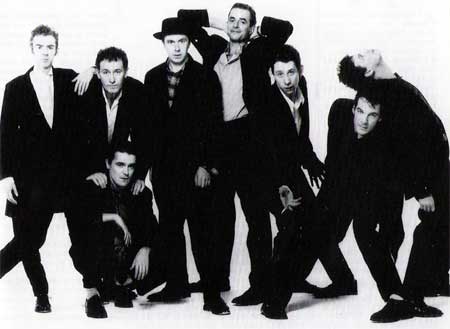 You think you took your life in your hands in the NIN mosh pit? Try a Pogues concert. That is, if you can score tickets. The current tour (2006) of the U.S. has the band in fine form-presenting Irish folk and drinking songs in punk-jig fashion. The members of the band are consummate musicians and entertainers. I never saw them before, but had heard some of their music. Sure it’s ethnic, and it’s damn entertaining! This is a review of their March 11, 2006 show at the Borgata Hotel and Casino in Frantic City, NJ.

The band’s been around since Christ was a corporal; Shane’s had the Popes, etc. The band had resurgence around Christmas 2004 and their popularity seems to have grown. The double CD, “The Pogues-The Ultimate Collection” is a good primer on their music.

The opening band, The Saw Doctors, were a cross between REM and leprechauns. Which is not to say they were not good. The crowd loved them, sang along with the songs (many of which, like the Pogues’ songs are these band’s renditions of traditional Irish songs). I liked them and will buy their CDs.

When the Pogues hit the stage, the band filed out, sans Shane. One of the band members said into a mike, “Someone’s missing…” The crowd cheered. Even if you know Shane McGowan’s got health and drinking and drug problems, nothing would prepare you for his stage presence. Sort of an updated Foster Brooks from the old Dean Martin days when drunks were funny. Though McGowan is not nearly as funny as he is endearing. With a deep gruff voice on which you can light a match, he mumbles the lyrics in time with the music. He appears to be coherent-he makes all the right sounds at all the right times-so maybe it’s your fault that you can’t understand anything he says! This is kind of funny when he attempts a few words to the audience between songs (random chuckling is heard amongst the crowd).

While lyrics are fine and good, it’s all about the vibe when it comes right down to it. I liked Shane’s raising of the glass (ice water?) every once in a while in recognition of the applause. He certainly didn’t seem ungrateful and obnoxious, as he appeared to audiences ten years ago.

What Songs Did They Play?

They did some gorgeous slow numbers like “Rainy Night in Soho,” and some poppy ones like “Sunnyside of the Street,” “Rain Street,” and Tuesday Morning,” (the latter two of which are as good as anything U2 ever wrote).

When they alternated with the rabble-rousing “Fiesta,” “Streams of Whiskey,” “Boys From the County Hell,” or any such like, the Pogues incited the crowd to riot. These fast Irish jigs would cause the slam dancers to endanger the lives of all those around them. A 19-year-old was ejected from the moshing crowd yelling, “I came to see the band! Not to DIE!” Then someone graciously shoved him back into the pit. It was great fun.

The Borgata’s a pretty good concert venue, with A.C.’s Hard Rock Cafe the only one better. It can accommodate a Standing Room crowd of a thousand, easily, with another 500 or so on bleachers. It’s a carpeted floor, too, so it’s easy on the feet.

The crowd adored the Pogues, and showed its support by VERY enthusiastically clapping, shouting, and bellowing them back for encores! Not the 30-second cheering, followed by dwindling applause, followed by the diehards’ shrill whistles which is the oh-so-typical prelude to the mandatory encore. Neither the band nor the audience were jaded enough to behave that way. This crowd never let up-it was good to see. They came from everywhere-Philadelphia, Toronto, Pittsburgh.

What were the crowd favorites?

The audience was so up for this show that on songs like “Dirty Old Town” and “The Irish Rover,” the lads and lassies in the audience actually drowned out Shane’s vocals as they shouted the words!

Fast jig (is there a slow jig?) slam dancing was the rule of the evening. As far as which songs stood out, these would be the ones Shane didn’t sing. The band was impeccable. Musicians of the highest caliber-electric and loud guitar, accordion, tin whistle, bouzouki, drums, keys, bass. But without McGowan’s disheveled rag-tag and loveable presence, they’d be just another Irish band. The guitar player with the wide-brim hat (Philip) sang one, the drummer sang one, and someone else did too.

Of the various singers who attempt to replace the deceased Kirsty MacColl on the Pogues Christmas classic “Fairytale of New York, Ella Finer appears during this tour. She did a competent job (which is quite the accolade when you consider the task of singing a duet with Shane MacGowan!). The band performed Fairytale of New York near the end of the show. For my money, this is one of the most beautiful Christmas songs in existence, with lines like:

After the vocal part was over, Ella and Shane waltzed on stage while confetti snow fell on them. I’m an emotional cripple–I cried. It was that magical.

How long did they play?

They played for two hours, with two encores (of three songs each). Well worth the money.

Should you see the show?

Who knows when someone will carry Shane to the window for one last look at the heather? See them before they are no more.

Not only do I highly recommend seeing them (if you can, i.e., as the entire U.S. tour is SOLD OUT), but also I recommend taking a small digital camera with you-especially if you’re a fan. Here’s an example of where its much easier to get forgiveness than permission. Not being a superfan, I didn’t take my camera. But being a photographer, I was pissed that I missed the opportunity to shoot the crowd surfing in front of Shane.

I was a good boy. I phoned the Borgata and asked if cameras were allowed. I was told “No.” So I didn’t bring one, and of course, no one was felt up for cameras and many people flashed away during the show. So my advice? In all cases, take your small digital camera. If a security guard finds it, take it back to the car. If you’re at the Borgata, check it at the coat check window.

What was bad about the show?

The show was over the top, but the available drink was lame. Hey Borgata, AMSTEL LIGHT? What were you thinking? This is the POGUES, man, and a POGUES crowd! Where’s the Guinness?!?!

What can we learn from Shane MacGowan and the Pogues?

Don’t build your dreams around anyone but yourself.

Problems in Ethical Monotheism: Why Does Evil Exist?
Next Post: Queen with Paul Rogers, Philadelphia 2006