In this course, we will explore traditions regarding fallen angels, demons and evil spirits, and Satan in the Bible, Judaism and early Christianity. We will examine the evolution of these concepts and discuss how our understanding of these entities developed and changed over time. This course takes a historical critical approach and focuses on close readings of primary texts.

This course is meant to be a brief introduction, so while we won’t cover everything, we will touch on a number of ideas like the nature of evil, the concept of human suffering, the fall of the angels, demon possession and exorcism, and the cosmic battle between good and evil.

At this time, only students from the US, Canada, UK, European Union, Australia & New Zealand can sign up for this course. VAT/GST will be added to non-US orders.

Who Should Take This Course?

This is an introductory course. There are no prerequisites. This course is for those who want an introduction to biblical demonology and the devil. 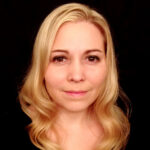 Krista started DeliriumsRealm as an undergraduate at the University of Pennsylvania almost 20 years ago. She holds a BA in Religious Studies and Biological Basis of Behavior from UPenn and an MS/MBA in Information Technology Management from Temple University. She also holds certificates in “Information Systems and Technology” (Temple) and “Professional Communications” (UPenn). She is a lifelong learner, having completed 40+ MOOC courses, and is a beta tester for Coursera in her spare time.

Module 1: Intro to The Devil & Origin of Evil

Lesson 1: What is a Demon? What is Demonology?
How people think about evil changes as cultures change. Yet most cultures have some type of personification of evil: whether that is real or imagined, literal or metaphoric. This lesson looks at what role demons and the Devil play in shaping our modern Western culture and how one might study demonology.

Lesson 2: The Problem of Evil
Why do evil and suffering exist in the world? Is evil a fundamental part of human behavior? If God is omnipotent, omniscient, and omnibenevolent, how can evil exist? This lesson explores these philosophical questions.

Lesson 3: What is Theodicy?
Over the years, many philosophers and theologians have grappled with the questions posed in the problem of evil. In this lesson, we discuss what theodicy is and several of the most popular Christian theodicies.

Lesson 5: How To Study Religious Beliefs Historically
This course takes a historical critical approach to the study of religion rather than a theological one. This means that we approach the texts and materials from the presupposition that you cannot understand a text without understanding its context.

Module 2: Evil in the Old Testament

Lesson 7: Is the Hebrew God Yahweh Omnibenevolent?
The Old Testament says God is the source of both good and bad fortune. In this lesson, we discuss the aspects of God that would allow him to kill the Egyptians’ firstborn or command Joshua to leave no Canaanite alive.

Lesson 8: Yahweh, the Divine Council & Angels
Yahweh acts at the head of a heavenly council of angels, sons of God, spirits and potentially foreign gods, similar to a royal court or a divine courtroom. In this lesson, we explore what roles these other entities play.

Lesson 9: Satan in the Old Testament
The term “satan” is used several times in the Old Testament to refer to a supernatural entity. In this lesson, we explore the Satan in his role of “Adversary” or “Accuser” in Yahweh’s divine council. We will look specifically at Numbers 22:22; 32, Job 1-2, Zechariah 3, and 1 Chronicles 21.

Lesson 10: The Combat Myth: An Overview
One popular theme in the ancient near eastern literature is the Combat Myth, involving combat between two gods or near-gods. In this lesson, we look at a few of the common elements of the myth.

Lesson 11: Ninurta vs Anzu
In this lesson, we will look at one of the earliest examples of the Combat Myth. The story of Anzu describes how the warrior Ninurta defeated the bird-like creature Anzu, who stole the king’s powers from Enlil, king of the gods.

Lesson 12: Enuma Elish: Marduk vs Tiamat
The Babylonian Epic of Creation, Enuma Elish, tells the story of how Marduk defeated the primordial chaos monster Tiamat to become king of the gods and create the world. We will look at how the Combat Myth is presented in this story.

Lesson 14: Old Testament Dragons, Leviathan & Rahab
In the Old Testament, there are numerous references to Yahweh having previously defeated various enemies like Sea, dragons (”tanninim”) or named dragon-like creatures like Rahab or Leviathan. We will see how Yahweh is often described in similar terms as the Combat Myth warriors of other stories.

Lesson 16: Asmodeus in the Book of Tobit
The apocryphal Book of Tobit which dates to the 3rd century BCE contains the first reference to a named demon in Jewish literature. In this lesson, we will look at how the author describes the exorcism of the demon Asmodeus.

Lesson 17: Fallen Angels/Watchers in 1 Enoch
The Old Testament doesn’t describe the fall of the rebel angels, but this legend was well-known by the time the New Testament authors wrote. 1 Enoch was an influential Jewish book that circulated widely and was the first to elaborate on who these “watchers” were, why they fell, and the consequence of their sins. In this lesson, we will explore key passages that discuss the fallen angels and their sins.

Lesson 18: The Demonology of Jubilees
What is the origin of evil spirits? Where do the demons that roam the earth come from. Like 1 Enoch, Jubilees was influential during the period after the Old Testament but before the New Testament. In this lesson, we look at how Jubilees compares to 1 Enoch in its explanation of why the rebel angels fell and why evil spirits roam the earth.

Lesson 19: The War Scroll: Michael vs Belial
The War Scroll (1QM), also known as the War of the Sons of Light against the Sons of Darkness, was found among the Dead Sea Scrolls. It provides a vivid depiction of a holy war between good and evil, which will eventually climax with God intervening to defeat Belial and his minions. In this lesson, we will explore how Belial is described and how the war between Belial and the angel Michael will play out.

Lesson 20: The Two Spirits in The Community Rule
The Community Rule (1QS) is an ethical treatise found among the Dead Sea Scrolls that describes who is considered righteous vs who is considered wicked. When God created mankind, he appointed two spirits to walk with them: one of truth and the other of injustice. In this lesson, we will discuss the dualistic framework that separates those who follow the Prince of Light and the Angel of Darkness.

Module 5: The Devil in the New Testament

Lesson 21: Satan Tempts Jesus in the Wilderness
The role of Satan as tempter is widely known. In this lesson, we explore the three challenges Satan tempts Jesus with in the wilderness. We will focus on Matthew and Luke’s accounts.

Lesson 22: Jesus the Exorcist
The role of Jesus as exorcist is prominent among the Gospels. In this lesson, we look at five exorcism stories to determine what symptoms the demoniacs had, what Jesus did to exorcise them, and what these stories say about Jesus’s power over demons.

Lesson 23: The Devil in Revelation
The book of Revelation offers the most complete account of Satan in the Bible. Here, Satan becomes the leader of the rebel angels and leads his demonic army against the angelic army of Michael and Christ. In this lesson, we will look at Revelation 12 which describes the Great Red Dragon, Revelation 13 which describes the rise of two beasts and the number 666, and finally Revelation 19-20 when Satan is defeated.