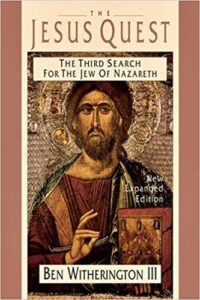 Ben Witherington III serves as editor for this compilation of scholarly essays surrounding the Third Quest for the Historical Jesus.

The first two chapters provide background first, for the social setting of Jesus and second, for the group of scholars known today as the Jesus Seminar. The Jesus Seminar has received much media attention and criticism because of the way that they present the historical Jesus. The group of about 75 scholars excludes some prominent theological schools and includes very few conservative scholars. Therefore, their views tend to be criticized as radical and their procedure less than democratic.

Chapter 3 describes Jesus, the Itinerant Cynic Philosopher as portrayed by several members of the Jesus Seminar. Much of this chapter describes John Dominic Crossan’s views presented in his widely known The Historical Jesus: The Life of a Mediterranean Jewish Peasant text and his portrayal of Jesus as a cynic, a view weighted more heavily on the Gospel of Thomas and Q more so than the Gospels, themselves. Witherington takes great pains to refute Crossan’s hypotheses.

Next, in direct contrast to Crossan’s Jesus, Witherington addresses Marcus Borg and Geza Vermes’ non-eschatological Jesus, a man of the Spirit who used its power to heal and cast out demons. Vermes’ Jesus was a Hasid, a theory which Witherington refutes.

In Chapter 5, Witherington presents the more traditional Jesus of E.P. Sanders and Maurice Casey, in Jesus the Eschatological Prophet. E.P. Sanders’ Historical Figure of Jesus opposes Crossan’s marginal Jewish (or as some say non-Jewish) peasant, and Sanders tends to give the Gospels far more credit than Crossan ever would. The chapter does a nice job of explaining Sanders’ view of the Kingdom of God and the restoration of Israel. The section on Casey describes Jesus as someone who set out to fulfill John the Baptist’s prophecy. Casey’s Jesus also not only foresaw his own death but viewed it as an atoning action.

Chapter 6 presents Jesus as a social reformer referencing the works of Gerd Theissen, Richard A. Horsley, and R. David Kaylor. Horsley’s Jesus started with grassroots origins in an attempt to oppose the familial and societal structures in place at the time. Thus, the Kingdom of God was more a social and political construct than a theological or religious one. Kaylor’s views are similar to Horsley, although he tends to ground Jesus in theology as well.

Elisabeth Schussler Fiorenza argues for Jesus as a prophet of God, whom he viewed as Wisdom or Sophia. In Fiorenza’s presentation, Jesus sought a kingdom of equals and opposed patriarchy. His death is attributed to resisting Roman domination.

Finally, John P. Meier’s Marginal Jew is addressed. In Meier’s work, Jesus is presented in a more traditional light with a focus on the canonical scriptures. Witherington provides a summary of Jesus’ life, as well as key features and questions in Meier’s arguments. The remainder of the chapter is spent on the scholars that believe Jesus actually saw himself as the Jewish Messiah.

Witherington tackles a lot in this volume on the Third Quest for the Historical Jesus, and for the most part, keeps a consistent, scholarly tone throughout the book. You do sense at times he is being overly conservative, especially with his treatment of the Jesus Seminar. That aside, if you are at all interested in who Jesus was before he became the legendary “Christ” who rose from the dead, this book will make for an interesting read. It’s also a very good starting book for anyone who wants a crash course in current scholarly theory on Jesus.