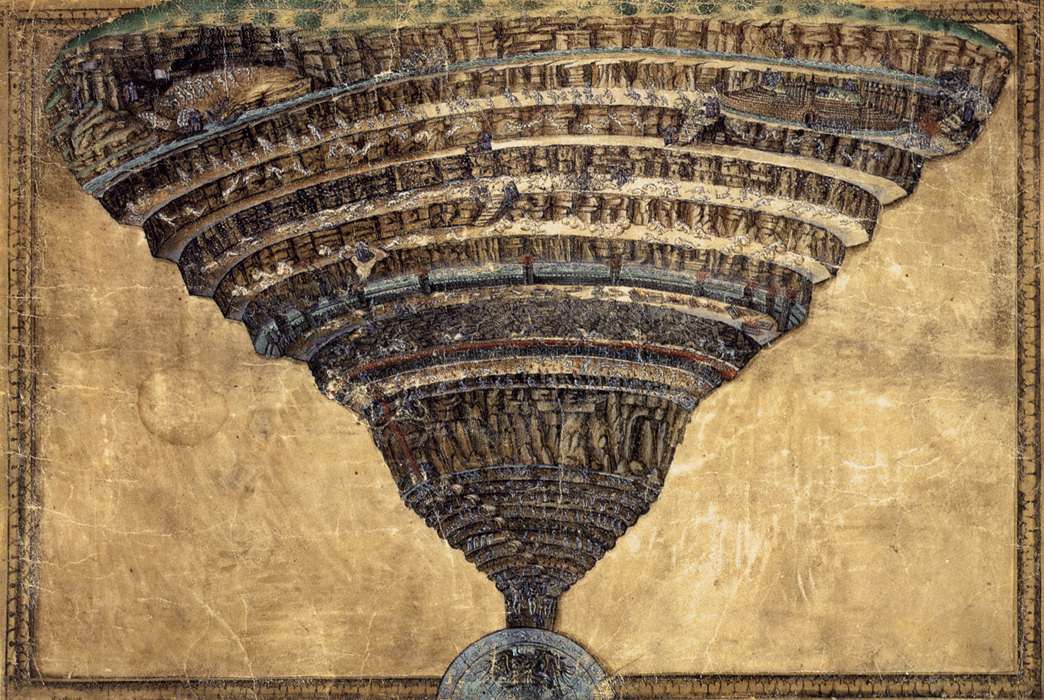 Abaddon, the "place of destruction" is synonymous with Sheol in Proverbs and Job. In later writings, Abaddon is personified as the king of the abyss who can command an army of locusts to torment men.

In Judeo-Christian traditions, Abaddon is known both as a “place of destruction” and a personified entity of destruction, though in most writings, it is primarily the former.

Abaddon in the Old Testament

While it may be argued that Prov 27:20, referring to Abaddon as “never satisfied,” is a personification of Abaddon, Job 28:22 is the first clear reference to Abaddon as an entity that can speak and hear.

In Revelation, Abaddon is the king of the abyss or bottomless pit who commands an army of locusts. According to Revelation 9:1-11, after the fifth angel sounds his trumpet, a star falls from heaven and opens the bottomless pit. A storm of smoke arises, and from the smoke, a plague of locusts emerge to torment, but not kill, men who lack the seal of God on their foreheads for five months.

While the root Apollyon (“the Destroyer”) is generally not used as a name in Greek writing, the Dictionary of Deities and Demons in the Bible notes that there may still be some connection with the Greek god, Apollo. Though Apollo was known as a god of prophecy, law, and purification, in his earliest accounts, he could both set plagues upon men and cure them. 9Becking, Bob, Pieter W. Van Der. Horst, and Karel Van Der. Toorn. “Abaddon.” Dictionary of Deities and Demons in the Bible: Second Extensively Revised Edition. 2nd ed. Leiden: Brill, 1999. 1. Print.

For instance, at the beginning of the Iliad, after Agamemnon captures Chryseis, her father Chryses tries to make a deal with the Greeks for her safe return. They refuse, so Chryses calls upon Apollo to intervene. Apollo does, causing a nine-day deadly plague to infect the Achaean army and cattle. 10Homer. The Iliad, Book I. The Internet Classics Archive. Web. Jul. 24, 2017. Perhaps this tradition is where the parallels with Abaddon, “the destroyer,” originate.

Later Christian theologians sometimes reference this personified entity with Satan. For instance, in Robert Jamieson et al.’s Commentary Critical and Explanatory on the Whole Bible, published in 1871, the authors describe Abaddon in reference to Rev 9:11 as follows:

Abaddon — that is, perdition or destruction (Job 26:6; Proverbs 27:20). The locusts are supernatural instruments in the hands of Satan to torment, and yet not kill, the ungodly, under this fifth trumpet. Just as in the case of godly Job, Satan was allowed to torment with elephantiasis, but not to touch his life. 11Jamieson, Robert, A.R Fausset, David Brown, Thomas Starling, John Brown. A Commentary, Critical and Explanatory, on the Old and New Testaments. Volume II: The New Testament. Hartford : S.S. Scranton & Co., 1878. Internet Archive. Web. Jul. 24, 2017.

It is not clear whether these authors meant to equate Abaddon with Satan, or simply that this is the work of Satan and that Abaddon in this context refers to “perdition or destruction,” something Satan is known to cause.

Abaddon References In Other Writings

Aside from Revelation, most later writings depict Abaddon as a place rather than an entity. For instance, in the Babylonian Talmud (Er 19a), Abaddon is listed second in the list of the seven names of the underworld (Sheol, Abadon, Baar Shachath, Bor Sheon, Tit Hayavon, Tzalmoveth, and Eretz Hathachthith). 12”Chapter II: Regulations Concerning the Use of a Well and a Garden on the Sabbath.” Babylonian Talmud, Book 2: Tracts Erubin, Shekalim, Rosh Hashana. Sacred Texts. Web. Jul. 24, 2017.

The first century AD text, Biblical Antiquities of Philo, (also called Pseudo-Philo because it probably was not written by Philo) says:

When the years of the world (or age) are fulfilled, God will quicken the dead, and raise up from the earth them that sleep: Sheol will restore its debt, and Abaddon its deposit, and every man will be rewarded according to his works. – III. 10. 13”Book 8: III. 10.” The Biblical Antiquities of Philo, translated by M. R. James. 1917. Sacred Texts. Web. Jul. 24, 2017.

Similarly, Abaddon is mentioned as a place in several of the Dead Sea Scrolls, including 14Vermès, Géza. The Complete Dead Sea scrolls in English, Revised Edition. London: Penguin Books, 2004. Epub.

While most writings simply equate Abaddon to a place within the underworld, Louis Ginzberg goes to great extent to describe the seven divisions of hell – including Abaddon – in his book, The Legends of the Jews. In The Creation of the World, Ginzberg describes hell as being comprised of seven divisions – Sheol, Abaddon, Beer Shahat, Tit ha-Yawen, Sha’are Mawet, Sha’are Zalmawet, and Gehenna – each sitting atop one another. He also states:16Ginzberg, Louis. The Legends of the Jews. Vol 1. Translated by Henrietta Szold. 1909. Sacred Texts. Web. Jul. 24, 2017.

Francis Barrett lists nine degrees of evil spirits in his book, The Magus (1801). In it, Abaddon is listed in conjunction with the 7th degree, where the furies live.

The seventh mansion the furies possess, who are powers of evil, discords, war, and devastation; whose name in the Revelation is called in Greek, Apollyon; in the Hebrew, Abaddon, that is, destroying and wasting. – The Magus, Chap VII.17Barrett, Francis “Chapter VII: Of the Order of Evil Spirits, and Their Fall, and Different Natures.” The Magus. London, 1801. Sacred Texts. Web. Jul. 24, 2017.

In S.L. Mather’s Key of Solomon, Abaddon is the name of God that Moses invokes to bring destructive rains.

and by the Name ABADDON which Moses invoked and sprinkled the dust towards heaven, and immediately there fell so great rain upon the men, cattle, and flocks, that they all died.18Mathers, S.L. Macgreggor. “Chapter VI. Stronger And More Potent Conjuration.” The Key of Solomon The King, Book I. 1888. Sacred Texts. Web. Jul. 24, 2017.