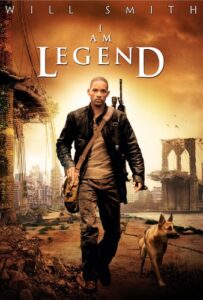 Set in 2012, three years after a government team of scientists discovered a virus that could cure cancer, humanity learns the hard way that this ‘good’ designer cure has horrible side effects. Now airborne, the virus has killed 90% of the population and turned the remainder into aggressive zombie-vampires called Dark Seekers. There were a handful of people who were immune to the virus, like Neville, but the legions of Dark Seekers apparently killed all other survivors.

Now Neville lives as a survivalist in New York City, spending his days following his daily schedule meticulously. By day, he hunts animals for meat, forages abandoned homes for food and supplies, plays with his dog, Sam, and tries to fend off his loneliness, hopelessness and guilt. It has been years since Neville has talked with a live human, and his daily behaviors show the effects of isolation. He now strikes up conversations with mannequins he has posed during his daily trips to the video store. He rents footage of old newscasts to hear the comfort of human voices again. And he talks with his dog, Sam, as if she was a real person. By night, Neville bars up his windows, locks his doors, and prays that the Dark Seekers won’t attack.

This is the third adaptation of Matheson’s novel and the most visual. The CG effects portray NYC as an eerily vacant, post-apocalyptic ghost town. Neville must wade through waist high weeds to hunt packs of deer that run freely through the streets. Abandoned cars sit rusting on main streets. Buildings are desperately in need of maintenance.

Through flashbacks, we catch glimpses of humanity’s last days – and how guilty Neville feels for being part of the team that created the virus. To compensate, Neville has not yet lost faith that he can cure Dark Seekers of their ailment. The virus, which affects humans and animals similarly, causes increases body temperature and pulse to over twice the norms, extreme sensitivity and burns when in sunlight, cravings for flesh and/or blood, and extreme aggression to the point where the infected repeatedly throw themselves head first against panes of glass to get at their target. Neville sees this as human de-evolution.

Things take a turn for the worse when Neville, in what is Director Francis Lawrence (Constantine)’s most suspenseful scene of the movie, walks into a dark building to find his disobedient dog, finds a nest of sleeping Dark Seekers, and decides to take a female for medical experimentation. Until this point, Neville has been extremely cautious about covering his tracks, but once he announces his presence, the Dark Seekers start a cat-and-mouse game to hunt him down.

This is where the movie stumbles – the Dark Seekers seem illogical. After Neville has stated in his research notes they are now devoid of human intelligence, the Dark Seekers set up a trap for him that eerily resembles the complex contraption he used to catch the female Seeker. At first, I thought their motivation for going after him was to get the female back – she appeared to be the only one in a group of look-alike males – but as the movie progresses, that doesn’t seem to be the case. It also doesn’t seem like they need him for food – they’ve been surviving well enough not knowing he exists, and there are plenty of animals living in NYC. Which leads me to conclude they simply go after Neville because they have nothing better to do – and in a manner reminiscent of every other zombie movie. If enough zombies rush at Neville, eventually a few will break through the obstacles to devour him.

The movie sets up the perfect scenario to deliver a philosophical treatise on human evolution or de-evolution, whether one race was superior, and science’s role in this mess – and yet completely ignored those elements, opting for some cheesy religious-driven conclusion.

I can’t imagine what Lawrence was thinking when he chose this route, but there may yet be hope when the dvd is released. According to an interview with SciFi.com, Lawrence mentioned this:

‘I don’t want to actually discuss the ending, just because I don’t want, I want people to make up their own minds, but maybe there will be an alternate version at some point’

I hope Lawrence decides to release the alternative ending because the first hour of the movie, along with Will Smith’s acting, is superb and deserves a better conclusion.