Hellion reviews Severance. It’s Office Space meets Deliverance, when a company retreat in Eastern Europe turns deadly for the sales division of a global weapons company, Palisade Defence, when they runs into a gang of mysterious, crazed killers. 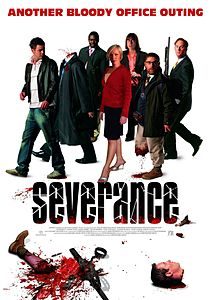 “When your head’s chopped off, your brain can think for like two to three minutes.”

It’s Office Space meets Deliverance, when a company retreat in Eastern Europe turns deadly for the sales division of a global weapons company, Palisade Defense, when they run into a gang of mysterious, crazed killers.

Keeping in the tradition of films like Hostel and Turistas, Severance again plays on the real fears, in that, nothing could be worse then going on vacation in a strange foreign land, only to find yourself the target of twisted killer psychopaths.

Since it works so well, something tells me this new fashion in the horror genre isn’t going away anytime soon. Getting harassed and even killed “abroad” isn’t just an American fear. It’s the fear of every single person around the world. In today’s horror films, that already plausible and universal notion is exaggerated to include torture and dismemberment. Most people really aren’t afraid to die, they’re afraid of suffering, and that’s the reason why these films are so successful. Oh sure, Freddy, Jason and Michael, the so-called kings of slasher films are indeed scary, but what are the real chances of running into one of them? With films like Hostel and Severance, the killers are ordinary men. No supernatural powers. No demonic possession. The evil is simply the breakdown of civilized actions in one man’s mind, or in this case, several men’s minds. It’s true, man is the scariest monster ever conceived.

The movie opens with two blonde women running and screaming for their lives, this is a glance at the end of the movie. For next 40 mins or so, we spend a little time getting to know our film’s vict…er, protagonists. The set up is bit long but a nice creepy score helps keep certain scenes pretty tense. Coupled with the humorous and witty dialog between the co-workers, viewers become engaged in the characters, so there’s no “waiting around for the killing to begin,” as with Turistas, which was just plain boring after awhile. Severance could have easily left out the murder spree altogether, heightened the laughs and the movie would have worked as a screwball dark comedy.

Mostly, what sets Severance apart from Hostel and Turistas, are the characters. The exchange between the co-workers gives viewers the opportunity to get to know each character. They are average stereotypical employees that can be found in any British office: the overzealous office manager; his loyal, hard-working assistant; the office kiss-ass; the witty jerk; the homely gal; the slacker; and, the spunky hot but smart American blonde. By the time the killing does start, the viewers have made up their minds which characters they want to live and which they want to die a torturous and gruesome death.

Like Hostel, rather than give you one bad guy, viewers are treated to a “gang” of killers. Quantity improves body count. A logical pondering that escapes most slasher films, (how does that ax-wielding madman get across to the other side of the lake so quickly anyway?) Here, viewers are not given any real information about the bad guys. There’s no point of view from the killers. There’s no explanation of who these killers are or why they’re doing this. The only thing viewers learn is that there a several legends surrounding the location where the company has chosen for their retreat. In the end, it’s left up to the viewers to decide who the killers are and why.

British director Christopher Smith seems to like mixing horror plots with everyday settings, just like he did with 2004’s Creep, which featured a girl trapped on the subway with a sinister being. Smith helps first time screenwriter James Moran rewrite Severance into a horror-comedy. Although, the film makes no big social or political statements, the dialog is dripping with dark sarcasm and there are subtle jabs at western societies and current events. Some viewers might find particular joy at the Palisade Defence CEO busting out a rocket launcher to fight off the madmen who are stalking his employees. The repercussions bad aim could qualify as the highest body count ever in a horror film in film history. But, that’s not the irony. The irony is the possible repercussions of those repercussions. Wars have started for far worse reasons. The one thing that stands out in my mind the most is how instability of the people in Eastern Europe can have such a devastating affect on Western society.

Football Factory’s Danny Dyer plays Steve, the office slacker. Steve is more interested in partying than bonding with his co-workers. Dyer leads the cast of highly talented veteran British actors, which includes Tim IcInnery from Blackadder notoriety, as the overly optimistic manager; newcomer Babou Ceesay as the underappreciated Billy; Andy Nyman as Gordon the office suck-up; Claudie Blakly as Jill the homebody; David Gilliam as the George the rocket launching company CEO; and Toby Stephens as Harris the office jerk. Rounding out the cast is Canadian star Laura Harris playing the feisty American Maggie who decides to fight back. Everyone fits snuggly into their role, and in some cases, may even be too talented for the material.

The only thing I couldn’t wrap my brain around was the way Director Smith indulges both himself and feminist supporters by providing both a strong, admirable lead female, only to turn around and show scenes of dozens of blonde bimbos parading around as eye candy. Even as a fantasy sequence, the scene seemed a little out of place. In interviews, the director stated he felt the film need more girls. I don’t know if that was just to sell more tickets or to add more humorous irony. Either way, it comes off as a “what the heck is that all about?” moment.

As stated before, without really explaining who or why, the film doesn’t really provide any real closure. Late into the film, viewers again meet up with two blondes from the opening scenes, they are actually Hungarian escorts hired by Steve to liven up the weekend. One of hookers ends up saving the day, in an ending that didn’t really keep in tune with the script at all. Honestly, it was rather disappointing. Almost as if film crew just ran outta gas. I expected more from such a witty movie that showed such promise up until this point.

Shot on location in the Hungarian woods, this 96 minute horror comedy is clever and packed with thrills. I must warn you the advertising for the movie was a little off. With taglines such as the “the office is making cutbacks,” viewers are led to believe the killer is someone working for the company. The trailers for the film played out the same way. It’s almost as if filmmakers didn’t want viewers to think this movie was just another Hostel.

For those who don’t judge a DVD by it’s case, they will be treated to a fun ride. A real bona fide horror comedy, not just gross out humor, can be an intriguing blend when done right. Severance ranks up there with another one of my favorite British films, Shaun of the Dead, that rare dual-genre film that equally satisfies in each genre. The laughs are funny, the thrills are scary. I give Severance four outta five pitchforks. Had the ending not been such a head-scratcher, I would have given it five.