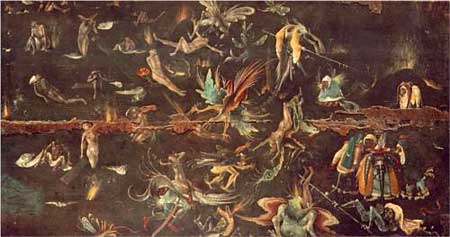 Nature of Spirits in the Goetia

The foreword to the Goetia sets out to explain some of the terminology involved and what exactly is meant by each of the spirits. To start, it is explained that the original Greek word, daimon, was derived by Plato from the Greek word

knowing.
The editor points out that modern definitions, such as that by G.J. Riley suggest that

the etymology more likely stems from the root , to divide (destinies). Thus the word could designate one’s fate or destiny, or the spirit controlling one’s fate, one’s genius.

), and a related word

meaning a wailer or in Crowley’s etymology, howling.

The following text is taken directly from introductory essay, The Initiated Interpretation of Ceremonial Magic in the Goetia.

The operations of ceremonial Magic consist of

These unusual impressions (1-5) produce unusual brain-changes hence their summary (6) is of unusual kind. Its projection back into the apparently phenomenal world is therefore unusual.

Herein then consists the reality of the operations and effects of ceremonial magic, and I conceive that the apology is ample, so far as the ‘effects’ refer only to those phenomena which appear to the magician himself, the appearance of the spirit, his conversation, possible shocks from imprudence, and so on, even to ecstasy on the one hand, and death or madness on the other.

But can any of the effects described in our book Goetia be obtained, and if so, can you give a rational explanation of the circumstances? Say you so?

I can, and will: The spirits of the Goetia are portions of the human brain. Their seals therefore represent methods of stimulating or regulating those particular spots (though the eye).

The names of God are vibrations calculated to establish:

… If, then I say, with Solomon: ‘The Spirit Cimieries teaches logic,’ what I mean is: ‘Those portions of my brain which subserve the logical faculty may be stimulated and developed by following out the processes called ‘The Invocation of Cimieries.’

…Solomon promises us that we can

I have taken these five powers at random considerations of space forbid me to explain all.

So for all other phenomena. There is no effect which is truly and necessarily miraculous.