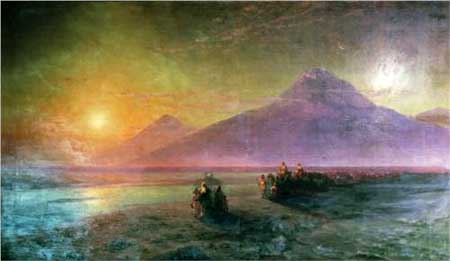 Nephilim in Genesis and Deuteronomy

Sons of God, Sons of Israel, the Nephilim, the Rephaim, and the Flood Myth

I was reading an article by Ronald Hendel, who relates the Genesis “Sons of God” passage to a fragment of Deuteronomy found at Qumran. In the Hebrew Bible, Deuteronomy 32:8 reads “sons of Israel” but in one of the Dead Sea Scroll fragments, the passage reads “Sons of God,” identical to the Genesis story (6:1-4) of the “Sons of God” (“bene ha ‘elohim”) who “cavorted with the daughters of men.”

Early Rabbis saw “bene ha ‘elohim” as referring to righteous men, not as the “Sons of God.” The Church fathers understood it as referring to the descendants of Seth. Both are kind of interesting because neither want to address that gods mated with humans and produced offspring.

The phrase “bene ha ‘elohim” and its variant “bene ‘elim” is found in other passages in the Bible, such as Job 1:6 and 2:1. Here, the Sons of God present themselves to Yahweh in the heavenly divine assembly. Job 38:7 says that the Sons of God have been with Yahweh at the creation of the world. They also appear in Psalm 89:7, where Yahweh is proclaimed incomparable to all other gods, and in Psalm 29:1 where the “”bene ‘elim”” sing praises to Yahweh.

The passage in Deuteronomy (32:8) reads “When the Most High apportioned the nations, when he divided the sons of man. He established the borders of the peoples according to the number of “the sons of Israel”.” The weird thing about this passage is how can the borders of all the peoples be established according to the sons of Israel when Israel hadn’t already been established? The end seems to contradict the beginning. This contradiction doesn’t appear in all Bibles, like the RSV based on the Greek Septuagint (dated from the 3rd century BCE), which state “according to the number of the Sons of God.” This is also the wording in the Hebrew DSS version, which is now the oldest version of Deuteronomy we currently have, & what scholars now believe as the most authentic.

The implications are that the Sons of God are not just present at the beginning of the world, but also figure prominently in dividing nations. That implicates that while Yahweh chose Israel as his nation, each of the other Sons of God also received a nation to rule over.

Sons of God in Canaanite Traditions

Canaanite traditions also use the term “Sons of God” (“banu ili” or “banu ili-mi”) in their texts dating back to the 14th century BCE. In the Canaanite pantheon, the chief god is El (meaning “God”) and his wife is Asherah. The phrase “Sons of God” can then be translated as the children of El. There are also references in Phoenician inscriptions of the 7-8th centuries BCE – Arslan Tash (KAI 27.II) and Karatepe (KAI 26.A.III.19) and in an Ammonite inscription of the 9th century found in Amman, Jordan. This may be an earlier tradition that Biblical phrase pulls from.

Now, in Genesis 6:1-4, the offspring of the Sons of God and the daughters of men are called Nephilim, who are the “heros of old, the men of renown.” Literally, the word nephilim means “the fallen ones” and is a common euphemism for “the dead” in Hebrew. For example, in Jeremiah 6:15, “They will fall among the fallen [Hebrew, nopelim]. In Ezekiel 32:27, the Nephilim are fallen warriors:

“They lie with the warriors,
The Nephilim of old,
Who descend to Sheol
With their weapons of war.”

Elsewhere, the Nephilim are giants who were native inhabitants of Canaan. In Numbers 13:33, they advise Moses “All the people whom we saw in its midst were people of great size there we saw the Nephilim – the Anaqim are part of the Nephilim – and we seemed in our own eyes like grasshoppers, and so we must have seemed in their eyes.”

In Deuteronomy 2:11, the giants Anaqim are called Rephaim, and two of the most famous of the Raphaim are King Og of Bashan, whose huge iron bed could still be seen on display in Rabbah of Ammon (Deuteronomy 3:11) and the warrior Goliath, who descended from the Raphah in Gath (2 Samuel 21:19ff). Thus, it would seem that the Nephilim were both the race of heroes who lived before the Flood and in Canaan before the Israelites conquered the Promised Land. The Rephaim and Anaqim were defeated by Joshua, Moses, and Caleb, and then the rest by David. Joshua 11:22 says that “No Anaqim remained in the land of Israel, but some remained in Gaza, Gath, and Ashdod.”

The Flood myth is probably derived from the Old Babylonian myth of Atrahasis, which tells of how the human world was so overpopulated with humans that the gods could not sleep because of the noise.

“… the people multiplied,
the land was bellowing like a bull.
At their uproar the god became angry
Enlil heard their noise.
He addressed the great gods,
“the noise of mankind has become oppressive to me.
Because of their uproar I am deprived of sleep.”

According to this narrative, humans lived forever, which created overpopulation. Natural death did not exist at that time, but humans could still be killed by physical harm. Enlil decides that the only way to solve to problem is to initiate a flood, to which the god Enki tries to stop. He has a man named Atrahasis build an ark for himself and his family and take animals with him to survive the flood. The two gods also finally compromise and create natural death, a fate which is also prescribed in the Genesis story “My spirit will not be strong in man forever, for indeed, he is but flesh. His lifetime will be 120 years. (Genesis 6:3)

In the original Nephilim story, the cosmic imbalance was not the overpopulation of Earth, but the mating of the Sons of Gods with the daughters of men to produce offspring. These Nephilim were the cause of the cosmic imbalance, and thus Yahweh sent the Flood to destroy them. However, it appears that in the Genesis story, the Flood narrative has been disconnected from the Nephilim as it was passed down through history. Therefore, in Genesis, the Flood was not a result of the overpopulation of earth (Babylonian) or the mating of the Sons of God and humans (as may have been the original intention of the narrative), but of mankind’s increasing evil on earth.