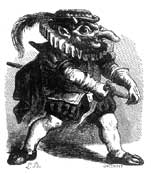 Picollus was revered by the ancient inhabitants of Prussia and would appear to important people during their last days.

Dictionnaire Infernal – Collin de Plancy (1863) (paraphrased)
Picollus was revered by the ancient inhabitants of Prussia. He was offered the head of a dead man and a tallow was burned in his honor. He would appear to important people during their last days. If he was not appeased, he would appear a second and finally a third time, when only human blood would mollify him.

Reader Comments: – Thanks to Linas for this!

Ancient Prussia inhabitants actually belong to baltic family (the same as Lithuanians and Latvians do).

No doubt we mean the same deity. Yes, he is not a
demon, but one of three greater Gods (Perkunas, Patrimpas, Pikulis). He is some kind of god-destroyer, god of death, decay. What Patrimpas (spring) gives and creates, Pokolus (winter) destroys, takes away. In some aspects similar gods in other mythologies would be Loki, Hades, Satan.

It is true that tallow was burnt in his honour. regarding these three appearances – actually it was believed that if Pokolus requires some kind of offering, he waits for two days. On third day the blood already is required to satisfy him. Offerings for Pokolus were: animals, horses, humans (?). The blood was spilled on the dedicated oak, which according to beliefs was evergreen.

He is believed to look like pale old man with a long beard. (So – the image of Pokolus, which is on your site – may serve only for one thing – you will anger him, and on a third day – you know what’ll happen 🙂 )