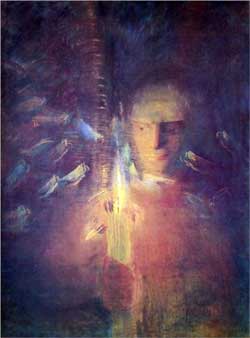 Like “super-string” physicists, kabbalists hold that the universe is comprised of 10 dimensions.

Usually, we think of the universe as comprised of 4 dimensions – spatial dimensions (length, width, height) & time. However, like “super-string” physicists, kabbalists hold that the universe is comprised of 10 dimensions. These extra dimensions take into account intangible objects such as consciousness, will, freedom, fictional and imagined entities, pure numbers, concepts and ideas, and spiritual, ethical and aesthetic values.

Each sefirah represents not only an aspect of human emotion but also a phenomenological construction of the world. The kabbalists speculated that the intangible objects such as will, wisdom, understanding, love, judgment, compassion, etc actually stand closer to the “source of being” than the physical objects of everyday life. Like in Platonic thought, abstract concepts like ideas and values represent a basic reality while the material structures are merely instantiations of those concepts. Thus there is a parallel between the microcosm and macrocosm with structures of the mind being said to be equivalent to the elements of the world itself.

The Sefer Yetzirah (Book of Formation) is one of the earliest proto-kabbalistic sources to describe the “sefirot” as the building blocks of creation.

It speaks of “thirty-two wondrous paths of wisdom” through which God “engraved and created the world.” The number thirty-two consists from the 10 primordial numbers (the “sefirot” and the 22 Hebrew letters. In this case, the term “sefirot” is derived from the Hebrew “sapar” meaning “to count.” However, because the author used the word “sefirah” in place of “mispar”, he meant to describe not ordinary numbers, but of metaphysical principles or stages in God’s creation. The “Sefer Yetzirah” describes the sefirot as “living numerical beings,” the hidden “depth” and “dimension” to all things.

By the time the earliest kabbalistic work, the Sefer Ha Bahir became popular in the late 12th century, the “sefirot” were understood not as numbers but as “aeons, logoi,” or attributes (“middoth”) which served as instruments of creation. They were also identified with “ma’amoroth”, the ten words or sayings by which the world was created (as indicated in the Talmudic tractate “Pirke Avoth 5:1”) and with “middoth” or God’s attributes or traits. Kabbalistic ideas of the “sefirot” built upon earlier Talmudic ideas, such as those in the midrash “Aboth de Rabbi Nathan”:

Seven “middoth” serve before the throne of Glory: they are Wisdom, Justice and the Law, Grace and mercy, Truth and Peace.” The parallel to this is the kabbalistic belief that
“Everyone who has these qualities as “middoth”, obtains the knowledge of God.

By ten things was the world created, by wisdom and by understanding, and by reason and by strength (“Gevurah”), by rebuke and by might, by righteousness and by judgment, by loving kindness and compassion.” – “Tractate hagiga, 12a”

In “Sefer Ha Bahir”, the Talmudic view that God has essentially two basic traits – “chesed” (loving kindness) and “din” (strict judgment) – is adopted and the two are considered to be the two most essential sefirot involved in creation of the world.

Sefirot as God’s Traits in 1 Chronicles

Isaac the Blind further developed the concept of the “sefirot” by identifying them with the biblical enumeration of God’s traits in 1 Chronicles 29:11, which referred to God’s greatness, power, beauty, victory, majesty, and sovereignty. Each of these traits eventually became important in ordering the lower 7 sefirot.

Sefirot as Finite Manifestations of Powers of the Infinite Godhead

By the 13th century, Aziel of Gerona had developed the concept of the sefirot even further, as finite manifestations of powers of the infinite godhead, “Ein-sof”. Each made up a portion of God’s totality and perfection and complemented his infinite divine power with its finite power. These finite powers must exist if one supposes “that He (Ein-sof) has unlimited power and does not have finite power, then you ascribe imperfection to His perfection.” The sefirot are mechanics of the creation and decay in the finite world – “the force behind every existent being in the realm of plurality.” The ten in number presumably correspond to Aristotle’s ten categories of being & are one with Ein-sof in the sense that the flame, sparks and aura are one with the fire. According to Nachmanides, God utilizes sefirot in roughly the same fashion as individuals use their bodies, so the sefirot are not actually outside of God. Aziel also explains that the nature “is the synthesis of everything and its opposite,” which makes up all our desires and thoughts, and even the energy and will of the human soul is drawn from them.

The Zohar conceptualizes the sefirot in a variety of different ways: summarized by Drob as “dimensions of the cosmos, archetypes for nondivine existence, spiritual forces within the world, activities within the godhead, gates or doors to the divine world, and aspects of God or ways in which God is perceived”. As Drob puts it, “in Kabbalah, the cosmos, the human soul, and the act of knowledge are a single, unified essence or substance.”

The Third Air and the Nature of Demons
Next Post: The Devil – Perceptions of Evil from Antiquity