The name Abraxas was taken from abra-cadabra. He is presented on amulets with the head of a cock, dragon’s feet and a whip in his hand.

According to Gustav Davidson (1994), Abraxas is considered the Supreme Unknown in gnostic theogony and the source of 365 emanations in Persian mythology. His name is found on gems and amulets, and is associated with the word “abracadabra.” 1Davidson, Gustav. “Abraxas.” A Dictionary of Angels: Including the Fallen Angels. N.p.: Simon & Schuster, 1994. 8. Print.

According to the Appendix of Tertullian’s De praescriptione haereticorum (On the prescription of heretics), the second-century heretic Basilides claimed that Abraxas is the supreme Deity who created Mind (Greek: Nous), Word, Providence, Virtue and Wisdom. Out of these, Abraxas is said to have created the Principalities, Powers and Angels, and the 365 heavens. One of these angels, who created this world, became known as the God of the Jews; however, Basilides considers him to be an angel, not a God. It was Abraxas, not this Jewish God, who sent Christ in ghost form, not as a flesh and blood human. Basilides also claims that it was Simon, not Christ, who was crucified.

Afterwards broke out the heretic Basilides. He affirms that there is a supreme Deity, by name Abraxas, by whom was created Mind, which in Greek he calls Nous; that thence sprang the Word; that of Him issued Providence, Virtue, and Wisdom; that out of these subsequently were made Principalities, powers, and Angels; that there ensued infinite issues and processions of angels; that by these angels 365 heavens were formed, and the world, in honour of Abraxas, whose name, if computed, has in itself this number.

Now, among the last of the angels, those who made this world, he places the God of the Jews latest, that is, the God of the Law and of the Prophets, whom he denies to be a God, but affirms to be an angel. To him, he says, was allotted the seed of Abraham, and accordingly he it was who transferred the sons of Israel from the land of Egypt into the land of Canaan; affirming him to be turbulent above the other angels, and accordingly given to the frequent arousing of seditions and wars, yes, and the shedding of human blood.

Christ, moreover, he affirms to have been sent, not by this maker of the world, but by the above-named Abraxas; and to have come in a phantasm, and been destitute of the substance of flesh: that it was not He who suffered among the Jews, but that Simon was crucified in His stead: whence, again, there must be no believing on him who was crucified, lest one confess to having believed on Simon. Martyrdoms, he says, are not to be endured. The resurrection of the flesh he strenuously impugns, affirming that salvation has not been promised to bodies. 2Tertullian. “Chap I – Earliest Heretics: Simon Magus, Menander, Saturninus, Basilides, Nicolaus.” Against All Heresies.. The Gnostic Society Library. Web. Jul. 24, 2017. 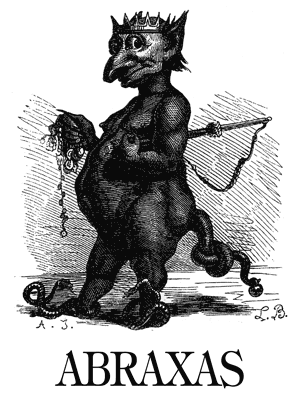 Carl Jung described a three-stage development in the human perception of God. The first stage was that God appears undifferentiated. The second stage is the perception of a benevolent Lord and an evil Devil in which each are separated to the point where the Devil is finally banished. The final stage is the integration of the Lord and the Devil. In his The Seven Sermons to the Dead he says:

Abraxas speaketh that hallowed and accursed word which is life and death at the same time. Abraxas begetteth truth and lying, good and evil, light and darkness in the same word and in the same act. Therefore is Abraxas terrible. 3Jung, Carl Gustav. “Sermo II.” The Seven Sermons to the Dead (Septem Sermones ad Mortuos). Translated by H. G. Bayne. 1916. The Gnostic Society Library. Web. Jul. 24, 2017.

Abraxas in the Dictionnaire Infernal

According to Collin de Plancy (1863), Abracax or Abraxas is one of the gods of an Asian theogony, and whose name is read in the Abracadabra phylactery. Abraxas is illustrated on amulets with a cock’s head, dragon feet, and a whip in his hand. Later demonologists described him with the head of a King and serpents for feet. 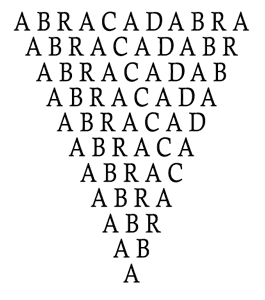 He was seen by the Basilidians (a group of second-century heretics) as the supreme god because the Greek letters that formed his name added up to 365, the number of days in a year. They placed under him several angels who presided over the 365 heavens, and to whom they attributed 365 virtues, one for each day of the year. They also claimed that Abraxas send Jesus Christ to earth in the form of a benevolent ghost. 4Collin De Plancy, Jacques Auguste Simon. “Abraxas.” Dictionaire Infernal. Paris: Henri Plon, Imprimeur-Editeur, 1863. 4-5. Internet Archive. Web Jul. 22, 2017

Collin de Plancy also described the word “abracadabra” as a Persian and Syrian word of enchantment that could cure fever and other diseases. The word was written in a triangular arrangement and was worn around the neck. 5Collin De Plancy, Jacques Auguste Simon. “Abracadabra.” Dictionaire Infernal. Paris: Henri Plon, Imprimeur-Editeur, 1863. 4. Internet Archive. Web Jul. 22, 2017