Aguares, the 2nd spirit, is a duke who appears as a man riding a crocodile. 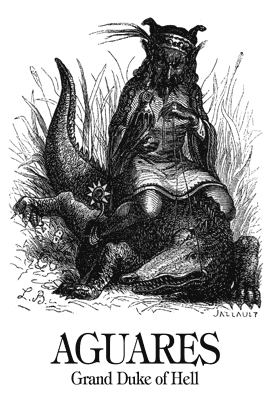 Gustav Davidson (1994) says that “According to legend, Agares was one of the 72 spirits Solomon is reputed to have shut up in a brass vessel and cast into a deep lake (or banished to “lower Egypt”).” 1Davidson, Gustav. “Aguares.” A Dictionary of Angels: Including the Fallen Angels. N.p.: Simon & Schuster, 1994. 10.

Agares in the Pseudomonarchia Daemonum

Weir (1583) describes Agares as a First Duke of the East who appears as a fair old man riding a crocodile and carrying a hawk on his fist. He teaches languages, fetches back those who run away, and makes those who run stand still. He overthrows supernatural and temporal dignities and can cause earthquakes. He is of the order of Virtues and oversees thirty-one legions.

Agares – The first duke under the power of the east, is named Agares, he commeth up mildile [i.e. he appears willingly] in the likenes of a faire old man, riding upon a crocodile, and carrieng a hawke on his fist; hee teacheth presentlie all maner of toongs, he fetcheth backe all such as runne awaie, and maketh them runne that stand still; he overthroweth all dignities supernaturall and temporall, hee maketh earthquakes, [lit. “and makes spirits of the earth dance”] and is of the order of vertues, having under his regiment thirtie one legions. 2Weyer, Johann. “Agares.” Pseudomonarchia Daemonum. 1583. Esoteric Archives. Web.

Agares in the Dictionaire Infernal

According to Collin de Plancy (1863), Aguares is a Grand Duke in the Eastern part of Hell. He is of the order of the virtues and governs thirty-one legions. He appears in the for of a Lord riding a crocodile and carrying a Peregrine falcon. He is said to make deserters return and can defeat enemies. He can give people dignities, teach all languages, and cause earthquakes. 3Collin De Plancy, Jacques Auguste Simon. “Aguares.” Dictionaire Infernal. Paris: Henri Plon, Imprimeur-Editeur, 1863. 10. Internet Archive.

Agares in the Goetia 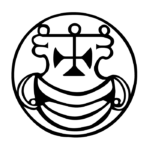 The Second Spirit is a Duke called Agreas, or Agares. He is under the Power of the East, and cometh up in the form of an old fair Man, riding upon a Crocodile, carrying a Goshawk upon his fist, and yet mild in appearance. He maketh them to run that stand still, and bringeth back runaways. He teaches all Languages or Tongues presently. He hath power also to destroy Dignities both Spiritual and Temporal, and causeth Earthquakes. He was of the Order of Virtues. He hath under his government 31 Legions of Spirits. And this is his Seal or Character which thou shalt wear as a Lamen before thee.4Mathers, S. L. MacGregor, Aleister Crowley, and Hymenaeus Beta. The Goetia: the lesser key of Solomon the King: Lemegeton, Book I–Clavicula Salomonis Regis. York Beach, Me.: Samuel Weiser, 1997. Print.