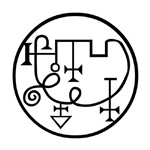 Andrealphus, the 65th spirit, is a Mighty Marquis, first appearing in the form of a noisy Peacock, then in human form.

Andrealphus in the Pseudomonarchia Daemonum

Weir (1583) describes Andrealphus as a Great Marquis who governs 30 legions. He appears as a peacock and makes great noises. He can also appear in human form. He teaches geometry, measurements, negotiation, and astronomy. He can transform a man into the form of a bird.

Andrealphus is a great marquesse, appearing as a pecocke, he raiseth great noises, and in humane shape perfectlie teacheth geometrie, and all things belonging to admeasurements, he maketh a man to be a subtill disputer, and cunning in astronomie, and transformeth a man into the likenes of a bird, and there are under him thirtie legions.1Weyer, Johann. “Andrealphus.” Pseudomonarchia Daemonum. 1583. Esoteric Archives. Web.

According to Collin de Plancy (1863), Andrealphus is a mighty marquis of hell who commands 30 legions. He appears as a peacock with a deep voice. He can also appear in human form. He can teach geometry, astronomy, and subtle negotiations. He can make men appear as birds.2Collin De Plancy, Jacques Auguste Simon. “Andrealphus.” Dictionaire Infernal. Paris: Henri Plon, Imprimeur-Editeur, 1863. 32. Internet Archive.

S. L. MacGregor Mathers (1904) describes Andrealphus similarly to Weir and de Plancy. Andrealphus is a Marquis who governs 30 legions. He first appears in the form of a noisy peacock but eventually takes on human form. He can teach geometry, subtlety, measurements, and astronomy. He can also transform a man into the shape of a bird.

The Sixty-fifth Spirit is Andrealphus. He is a Mighty Marquis, appearing at first in the form of a Peacock, with great Noises. But after a time he putteth on Human shape. He can teach Geometry perfectly. He maketh Men very subtle therein; and in all Things pertaining unto Mensuration or Astronomy. He can transform a Man into the Likeness of a Bird. He governeth 30 Legions of Infernal Spirits, and his Seal is this, etc.3Mathers, S. L. MacGregor, Aleister Crowley, and Hymenaeus Beta. The Goetia: the lesser key of Solomon the King: Lemegeton, Book I–Clavicula Salomonis Regis. York Beach, Me.: Samuel Weiser, 1997. Print.