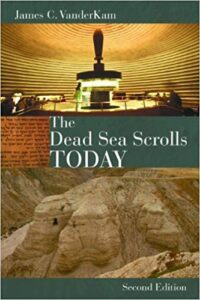 Using the Qumran Essene hypothesis as grounds, VanderKam sketches a portrait of the group’s history and beliefs based on archaeological evidence and textual interpretation. He spends considerable time comparing the scrolls to the Old Testament manuscripts we currently have. One noteworthy example is the comparison of the almost complete manuscript of Isaiah found at Qumran (copied 100 BCE) with the Masoretic Text (895-925 CE). Though the two were written almost 1000 years apart, they are almost identical except for a couple of small details that rarely affected the meaning of the text. An example is Isaiah 6:3 where the Masoretic Text has the seraphim in the heavenly throne room call to one another “Holy, holy, holy is the Lord of hosts” whereas in the Qumran manuscript, the text reads “Holy, holy is the Lord of hosts.”

Another interesting example is the case of Jeremiah, which is approximately 1/8 shorter in the Septuagint than in the Masoretic Text. Six manuscripts of Jeremiah were recovered from Qumran, and of those, most clearly have the Masoretic Text. However, one manuscript (the second copy from Cave 4) just as clearly contains the shorter Greek version, missing the same verses not found in the Septuagint.

The Jewish historian, Josephus, who wrote a history of the Jews called “Jewish Antiquities” wrote of a lengthy summary of the biblical narrative in 1 Samuel 11 about Nahash, adding details not found in the biblical tradition. This additional material was also found in 4QSam at Qumran.

VanderKam also adds a chapter comparing the language of the scrolls with the New Testament. He is quick to point out that while the texts do share some common language, Jesus was never mentioned in the Dead Sea Scrolls, and it is almost universally accepted that he was not the Teacher of Righteousness. Themes such as the calendar, common practices of sharing a meal, and eschatology and messianism are also addressed.

In a final chapter, VanderKam describes the controversies involved in editing and publishing the scrolls including the protest against Strugnell and the alleged suppression of the texts.