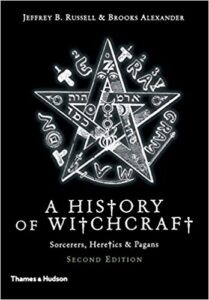 Russell does a magnificent job tracing the history of witchcraft from its origins to its current manifestations today. The book is top-notch, complete with 94 pictures and illustrations to help readers get a feel for the different interpretations of witchcraft over the ages.

Russell begins showing that there are many definitions of what a witch is: (1) from the anthropological approach, a witch is a sorcerer; (2) from the historical approach, a witch is a Satanist; (3) from the modern definition, a witch worships ancient gods and practices magic. He also attempts to debunk common perceptions of witchcraft such as witches don’t exist, witches practice Voodoo, or that witches participate in the Black Mass. Russell disputes these popular superstitions with modern and historical data, defining the definitions of ‘Wicca’, ‘witch’, ‘warlock’, ‘wizard’, and ‘sorcerer’ along the way.

Careful detail is spent describing sorcery and historical witchcraft. Russell talks about the Zande of southern Sudan and their three varieties of magic: good, benevolent magic, such as oracles and diviners, amulets of protection, fertility rites, and even bagbuduma, homicidal magic used for revenge against those who had slain one’s kin. Sorcery was magic from jealousy, envy, or greed, and was thought to be unjust. Finally, there was witchcraft, an internal power inherited from parents. Russell continues with a discussion of Voodoo and sorcery from ancient times.

About 1450, with the Renaissance and Reformation, came the witch-craze, which lasted about 200 years. The rise was concurrent with the rise of Renaissance magic, which struggled to separate its wise and benevolent magic from the evil magic of the witches. A lengthy discussion of the witch trials of England and America, societal influences, and finally the decline of the witch hunts follows.

This book is an easy read, full of pictures and anecdotes, that help weave together an excellent presentation of witchcraft from its beginnings to now.