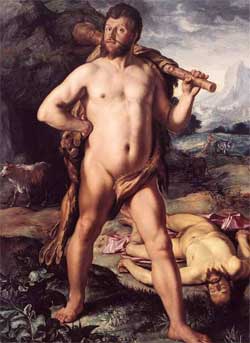 In Roman mythology, Cacus, the son of Vulcan, was a giant who lived in a cave on Mount Aventine.

In Roman mythology, Cacus, the son of Vulcan, was a giant who lived in a cave on Mount Aventine.

The monster Cacus, more than half a beast,
This hold, impervious to the sun, possess’d.
The pavement ever foul with human gore;
Heads, and their mangled members, hung the door.
Vulcan this plague begot; and, like his sire,
Black clouds he belch’d, and flakes of livid fire.
Time, long expected, eas’d us of our load,
And brought the needful presence of a god.
Th’ avenging force of Hercules, from Spain,
Arriv’d in triumph, from Geryon slain:
Thrice liv’d the giant, and thrice liv’d in vain.
His prize, the lowing herds, Alcides drove
Near Tiber’s bank, to graze the shady grove.
Allur’d with hope of plunder, and intent
By force to rob, by fraud to circumvent,
The brutal Cacus, as by chance they stray’d,
Four oxen thence, and four fair kine convey’d;
And, lest the printed footsteps might be seen,
He dragg’d ’em backwards to his rocky den.
The tracks averse a lying notice gave,
And led the searcher backward from the cave.
– The Aeneid, Book VIII

Hercules’ tenth labor was to steal the cattle of Geryon, the king of Tartessus in Spain. On his way home, he stopped to rest at King Evander’s home. That night, Cacus stole two of the finest bulls and four heifers, dragging the cattle backwards by their tails in order to cover up their tracks and make it seem as if they had gone in the opposite direction.

When Hercules awoke, he searched in vain for the missing cattle. However, as he was driving the remainder of the herd past the cave where Cacus had hidden them, one of the heifers lowed loudly enough so that Hercules heard it. He followed the sound, retrieved the missing cattle, and killed Cacus.

While Evander’s house provided him hospitality,
His cattle, unguarded, ranged the wide fields
Morning had come. Awakened form sleep, the drover from Tiryns
Noticed two bulls were missing from the count.
He searched in vain for traces of the theft. Savage Cacus
Had dragged them backwards into his lair,
Cacus, the terror of the Aventine and a blot on its woods,
A serious nuisance to neighbors and strangers.
The man’s face was dreadful, his manliness fit his size, and his size
Was huge (Vulcan was the creature’s father).
His home was a cavern with extensive tunnels, so hidden away
That wild animals could scarcely find it.
Heads and arms hung nailed up over the doorway,
And the filthy ground was white with human bones.
Jupiter’s son was leaving with the poorly guarded remnant
Of his herd. The stolen goods bellowed hoarsely.
“I heed your call,” he said. Following the sound, he came
though the woods to the wicked lair, bent on revenge.
Cacus had blocked the entrance with a mountain top. Ten teams
Of oxen could hardly have moved that bulwark.
Hercules put his shoulders to it (they’d supported the heavens once)
And made the mighty burden shake and quake.
Once it was dislodged, the crash alarmed the very heavens
And the earth sank under the weight.
At first Cacus battled hand to hand, and savagely
Conducted the engagement with logs and rocks.
When those had no effect, the coward resorted to his father’s
Element and spat out fire from his roaring mouth.
Each time he breathed out, you’d have through the giant
Under Mount Etna was spewing flashes of lightning.
Hercules grabbed him and wielded his knotty club, sinking it
Again and again in the main’s upturned face.
Cacus fell and spat out bloody smoke, and dying,
Struck the ground with his broad chest.
– Fasti, Ovid, Book 1: 545-578