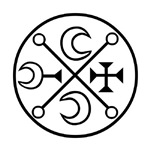 The Sixty-ninth Spirit is Decarabia. He appears in the Form of a Star in a Pentacle.

Decarabia or Carabia, he commeth like a * and knoweth the force of herbes and pretious stones, and maketh all birds flie before the exorcist, and to tarrie with him, as though they were tame, and that they shall drinke and sing, as their maner is, and hath thirtie legions.

The Sixty-ninth Spirit is Decarabia. He appeareth in the Form of a Star in a Pentacle, at first; but after, at the command of the Exorcist, he putteth on the image of a Man. His Office is to discover the Virtues of Birds and Precious Stones, and to make the Similitude of all kinds of Birds to fly before the Exorcist, singing and drinking as natural Birds do. He governeth 30 Legions of Spirits, being himself a Great Marquis. And this is his Seal, which is to be worn, etc.