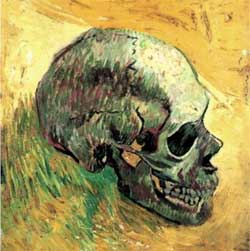 Ereshkigal, the ruler of the underworld, is the sister of Ishtar/Inanna.

Ereshkigal, the ruler of the underworld, is the sister of Ishtar/Inanna. One myth is as follows:

Ereshkigal was originally a sky goddess who was kidnapped by the dragon, Kur, and taken to the underworld, where she was enthroned as Queen. While there, Nergal, the son of Enlil and originally a sun deity, forced his way through the underworld and threatened to destroy Erishkigal’s reign unless she became his wife.

There is great animosity between Ereshkigal and Ishtar, and the Descent of Inanna/Ishtar tells of how Ishtar/Inanna descended to the underworld.

Descent of Inanna/Ishtar to the Underworld (Sumerian)

In the Sumerian version of the myth, dated around 1900-1600 BCE, Inanna decended to the underworld using the Eastern entrance in attempt to obtain Ereshkigal’s power over the underworld. In order to reach Ereshkigal, Inanna needed to pass through the seven gates of the underworld, and was not allowed to pass through unless she removed an article of clothing for each of gate. Her clothes were symbollic of her divine power, thus she was systematically weakened in this fashion. By the time she arrived in the inner palace, she was naked and almost dead, but still determined to complete her task, when Ereshkigal arose from her throne, Inanna took it. Ereshkigal’s counselors, the Anunnaki, sentenced her to death for this action and hung her corpse on a hook.

However, before Inanna had begun her journey, she had instructed her messenger, Ninshubur, that if she did not return within 3 days and 3 nights, to seek help for that would mean she was dead. Ninshubar first sought help with the gods, Enlil and Nanna, but they refused to aid her believing she deserved to die for her ambition. He then asked Enki, the lord of wisdom who had access to the food and water of life, for aid. Enki created 2 creatures, the kurgarru and the kalaturru, from the dirt of his fingernails and instructed them to carry the food and water of life to Inanna in order to revive her. Their mission suceeded, but the Anunnaki demanded a substitute for her if she was to leave. A legion of demons accompanied her from the netherworld to search for her replacement. Inanna refused to allow the demons to take anyone who had wept for her during her confinement as a replacement.

When Inanna came upon her husband, Dumuzi, she found him adorned in a magnificent robe instead of mourning clothing. She told the demons to take him as her substitute. Dumuzi quickly used his magic to change himself into a reptile, and escaped to his sister, Gestinanna. She took pity on him and agreed to take his position in the underworld for half the year, while he would spend the other half the year in the underworld.

Descent of Inanna/Ishtar to the Underworld (Akkadian)

The Akkadian version of the myth dates to around 1100 BCE, and substitutes the name, Ishtar, for Inanna. Ishtar descended to the underworld and threatened her way inside. In accordance with the customs of Ereshkigal, however, for every one of the seven gates she passed under, a guardian removed a portion of her attire. When she reached Ereshkigal, she was nearly dead. simultaneously, on the earth, a great famine struck, and no life force could reproduce. The god Ea sent a eunich to make a bargin with Ereshkigal: clean water for the release of Ishtar. She cursed the eunuch, consulted with the Anunnaki, and then ordered the release of Ishtar, who was given back her possessions as she passed through the seven gates and out of the underworld. However, for Ishtar’s release, Ereshkigal demanded a replacement.