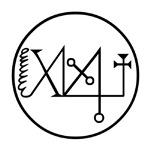 Focalor, the 41st spirit, is a mighty Duke who appears as a man with gryphon's wings.

Focalor is a great duke comming foorth as a man, with wings like a griphen, he killeth men, and drowneth them in the waters, and overturneth ships of warre, commanding and ruling both winds and seas. And let the conjuror note, that if he bid him hurt no man, he willinglie consenteth thereto: he hopeth after 1000. yeares to returne to the seventh throne, but he is deceived, he hath three legions.

The Forty-first Spirit is Focalor, or Forcalor, or Furcalor. He is a Mighty Duke and Strong. He appeareth in the Form of a Man with Gryphon’s Wings. His office is to slay
Men, and to drown them in the Waters, and to overthrow Ships of War, for he hath Power over both Winds and Seas; but he will not hurt any man or thing if he be commanded to the contrary by the Exorcist. He also hath hopes to return to the Seventh Throne after 1,000 years. He governeth 30 Legions of Spirits, and his Seal is this, etc.