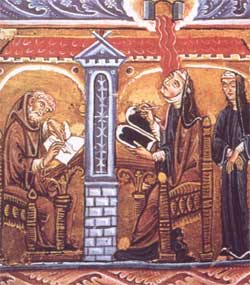 Born in 1098, Hildegard of Bingen became one of the most famous mystics of the age. At a time when very few woman were literate and held status, Hildegard wrote over 300 letters and was widely respected for her mystical visions, medical knowledge, and musical compositions.

The 10th child of a noble family, Hildegard was placed in the care of Jutta, sister of Count Meinhard of Sponheim. She started receiving visions early in life but kept them to herself for many years until in 1141 (at the age of 42), God commanded her to write them down.

Hildegard is considered one of the first feminists in Church history. In one vision, she saw Jesus on the cross and Mary beneath, holding a chalice. As Mary caught some of the flowing blood in the cup, she offered the body and blood of her son, Jesus, to Hildegard. This is significant because at this time, many nuns and female mystics purified themselves through fasting, often not eating anything for days except the Holy Communion. Here, Mary (a woman!) was offering both nourishment and salvation through Jesus.

Hildegard was also the first to suggest that during conception, the woman is not merely a vessel for the man’s semen. Previously, it was believed that semen was the origin of all life and that during conception, the woman received, but did not contribute, anything of her own. This was the prominent belief dating back to the ancient Greeks. Hildegard was the first to challenge this notion, citing Genesis – that while Adam was made from clay, Eve was made from Adam, a human, so she is the true mother of Christianity.

Also at this time, Augustine’s theology of Eve as Adam’s temptress was still popular. Eve was considered the cause of mankind’s banishment from Paradise. Hildegard opposed this view, arguing that because God choose a virgin woman to bear his son, this cancelled Eve’s debt.

Influenced by courtly love and Hildegard’s vivid visions of the Virgin, the cult of the Virgin gained popularity and Christianity became more feminized. These were revolutionary ideas at the time and helped shape the role of women in the Church.