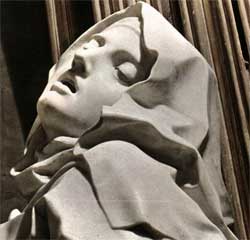 Mysticism is difficult to define, largely because it encompasses so many different practices and beliefs – from Catholicism to Kabbalah. Its purpose is the divine union with the Godhead or the Ultimate Reality.

Western culture is preoccupied with the self – the “I” or “ego” – and that there is a world beyond our grasp. We are constantly torn between our individualism and wanting to be part of the grander “whole” – the oceanic feeling Freud described.

We also struggle with the questions – what is real and how can we know what is real? These questions have been debated for millennia. According to Plato, matter is an illusion and is ever-changing, so we must turn to the world of the intellect where the “forms” exist. His most famous example of this was his allegory of the cave.

His student, Aristotle disagreed. Without getting into a lengthy discourse on his metaphysics, Aristotle believed what was real was that which could be experienced through the senses. Modern physics has proved this to be an illusion because at the atomic level, most matter is made up of empty space. Our senses, which deceive us into believing matter is solid, cannot sense the true reality. Finally, there are the skeptics like Descartes who believed that there’s nothing we can know with absolute certainty, so we must doubt everything.

Modern western culture is one of distraction. We are constantly finding ways to entertain ourselves from music to tv to the internet. We are always doing or worrying about something, and rarely do we take a few moments to quiet our inner chatter and look within ourselves.

Mystics take a different approach, claiming they’ve found a better way to understanding the real – one of self introspection and meditation. They separate themselves from worldly distractions to see things as part of the “whole.” They put aside all thoughts and worries and focus on what they see for what it truly is – and they appreciate it for its beauty.

There are two main types of mystical ideologies: emanation and immanence. The vast majority of Christian mystics subscribe to the emanation ideology. Here, an unknowable God exists outside the world and can’t be perceived directly. Mystics see different manifestations of characteristics of God, starting with the lower ones and making their way up a spiritual “ladder” towards the Godhead – like the Sephiroth in Kabbalah. For these mystics, God is unknowable.

The other type of mystical ideology is immanence – that God exists within you, so looking outside yourself is futile. The first century Platonist and mystic, Plotinus explained it as such:

God is not external to anyone, but is present with all things, though they are ignorant that He is so. – Ennead vi. 9.

The problem with immanence is that some people assume that because God is within them, they, themselves, are gods.

When mystics talk about their experiences, they often use symbolic language. Two metaphors commonly used are the pilgrimage and love. Mystics often see themselves on a journey with the final goal union with God. When they finally experience this union, they have a difficult time conveying what they experienced. They describe their union as having no words to describe it – so often, they turn to sexual imagery with Christ as the bridegroom and their soul (as feminine) meeting in the bridal chamber.

One way to think about this is if you’ve ever had an experience that just moved you – maybe you with someone you loved or at a special place – where just by speaking, you’d fail to convey the well of emotion you felt. It was inarticulate – yet, that unspoken moment between you and someone else said everything you could possibly hope to say. That connectedness with the person you were with or the wholeness you felt in a particular place that is impossible to explain to someone that wasn’t there is similar to how the mystics describe their experiences.

5 Stages of a Mystical Experience

Evelyn Underhill, who wrote a book on Mysticism in the early 1900s, described five stages in the mystical experience.

Trying to understand mysticism is limited in a few ways. The first problem is comprehension. Mystics use metaphor to describe their union with God. However, since words fail to describe such powerful experiences, they allude to more common human experiences like sex and orgasm. Keep in mind, this language is purely figurative as a way of expressing their ecstatic state rather than a literal “I had sex with God in physical form.”

The other problem is that much of society was not literate, so we don’t have first hand accounts of what those that did not write thought. Historians are left to piece together what popular culture believed, which can be difficult with so many religious shifts going on at the time. If we solely rely on the writings we have, we’re left with a somewhat biased interpretation and can only see one piece of the puzzle, and that can skew our understanding of what really was going on.