Quest for the Holy Grail

Legends have talked about the Holy Grail, the cup Jesus and disciples drank from at the Last Supper and alleges to give eternal life, since the Middle Ages.

Legends have talked about the Holy Grail, supposedly the cup Jesus and disciples drank from at the Last Supper and alleges to give eternal life, since the Middle Ages. It began with the gospels:

And when He had taken a cup and given thanks, He gave it to them, saying, “Drink from it, all of you; for this is My blood of the covenant, which is poured out for many for forgiveness of sins. – Matthew 26:27-28

Was this cup really a special cup used at the Last Supper, or was it just an ordinary Passover cup? In all likelihood, the cup itself was probably carved of wood or white chalk, a form of limestone that many first century cups were made from, rather than made of metal (see pic on right). And if so, it is unlikely that the cup would have survived through the centuries the way a metal one might.

Regardless, by the Middle Ages, this cup, whether symbolic or actual, became quite popular. According to British historian Richard Barber, the earliest evidence of the cup as a relic comes from the late 7th century CE. A Frankish bishop named Arculf traveled to Palestine and recorded his journeys. He wrote that in the Church of the Holy Sepulchre in Jerusalem, he saw a silver metal chalice known as the Lord’s cup.

Between the basilica of Golgotha and the Martyrium, there is a chapel in which is the chalice of the Lord, which he himself blessed with his own hand and gave to the apostles when reclining with them at supper the day before he suffered. The chalice is silver, has the measure of a Gaulish pint, and has two handles fashioned on either side… After the Resurrection, the Lord drank from this same chalice, according to the supping with the apostles. The holy Arculf saw it, and through an opening of the perforated lid of the reliquary where it reposes, he touched it with his own hand which he had kissed.

The term grail came from the French writer Chretien de Troyes who wrote a romance called Perceval. The author died in 1190 CE before finishing the piece. In it, a young knight visits the castle of the Fisher King where he sees a strange procession in which a gem-encrusted gold dish called a ‘grail’ and learns that it is a Holy thing used to carry a communion wafer (host). In the procession, he also sees a boy carrying a lance that bleeds from its tip, possibly a reference to the lance that pierced Jesus’ side on the cross (John 19:34) thus potentially relating this grail with an artifact of the Passion. Since the story was never finished, it’s impossible to know what the author meant.

Regardless, this unfinished story became fodder for numerous authors who set out to finish it. Two famous ones are Wolfram von Eschenbach’s Parzival and Robert de Boron’s The History of the Grail. Boron, writing early in the 13th century, was the first author to write that the Grail specifically identified with an artifact used at the Last Supper. Here, Boron writes that the cup journeyed from Jerusalem to “the land in the West” (possibly Britain) where it became central to the King Arthur legend.

Most medieval writers described it as some type of bowl or dish – either referring to the dish that Judas dipped his hand in or the cup his disciples drank from (cf Matthew 26:23,27).

The word ‘grail’ may be derived from the Latin gradalis which refers to a broad platter for serving meats. It may also be related to the Greek krater, a broad chalice with handles, and the interpretation that most later writers favor.

In Boron’s three part poem, Joseph of Arimathea, one of Jesus’ followers, received the cup from Pontius Pilate after the Crucifixion. He then is imprisoned, but the risen Christ brings him the grail and it sustains him for 40 years in prison. When he is released, he constructs a “Grail Table” with 13 seats to commemorate the Last Supper, and then gives the grail to his brother in law, Bron, who carries it west. Later, Merlin counsels Arthur’s father to construct the Round Table based on Joseph’s Grail Table.

In Boron’s poem, Joseph also used the grail to collect Jesus’ blood when he buries Jesus after the Crucifixion.

“Dear grandson, know that this is the lance with which Longinus struck Jesus Christ on the cross, and this vessel that is called the Grail, know that this is the blood that Joseph caught from His wounds which flowed to the earth, and the reason that we call it the Grail is that it is agreeable to all worthy men and to all those who can stay in its fellowship; nor will it in its fellowship permit sin.

According to Wolfram, the grail dispensed food and drink to hungry, spiritually pure knights.

That is, if on your oaths ye’ll swear
The Grail of everyone took care
(If truth I am denying,
Perforce ye too are lying!)
Whatever someone wanted,
That by the Grail was granted:
Dishes warm, dishes cold,
Dishes new and dishes old,
Meat that’s tame and meat that’s game.

Medieval writers often depicted a strong link between the grail and Jesus’ body and blood, demonstrating that it was symbolic of the Eucharist.

In the 12th century, the Catholic church faced opposition from the ‘heretical’ Cathar movement in France, who challenged the Church’s teaching that the Eucharist was the path to salvation. It coined the term transubstantiation to describe how when the communion bread and wine was blessed by a priest, it changed into Jesus’ flesh and blood. 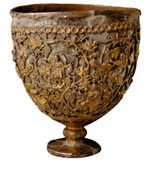 Numerous bowls and chalices over the centuries have been reported to be the Holy Grail. The pic on the right is of the anioch Chalice, a silver chalice at the Metropolitan Museum of New York. It came to light in 1908, having belonged to a church in Kaper Koraon near Antioch. It is decorated with vines, animals, and ten seated disciples and two images of Jesus. It probably dates back to the sixth century.

Adam’s Pact With the Devil
Next Post: How Political Shifts Led To The Reformation and Witch Craze