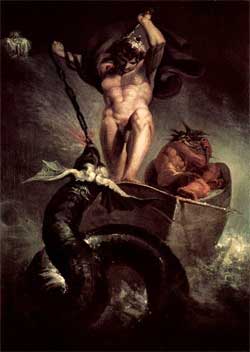 The serpent, Jormungand was the middle child of Loki and the giantess, Angrboda.

The serpent, Jormungand was the middle child of Loki and the giantess, Angrboda. He had 2 siblings, Hel, and the wolf, Fenrir.

Alarmed that Loki had fathered these children, Odin sent a group of gods to kidnap them. Once captured, Odin threw Jormungand into the ocean surrounding Midgard, where he lived from then on. The serpent grew so much that he encircled the whole world and bit his own tail.

At Ragnarok, Jormungand will escape to dry land and spew venom over all the earth and sky. He will then fight Thor, Son of Earth, who will kill the serpent at Vigrid, not before he is poisoned by Jormungand’s venom. Thor will only be able to take 9 steps after killing the serpent before he also falls dead.