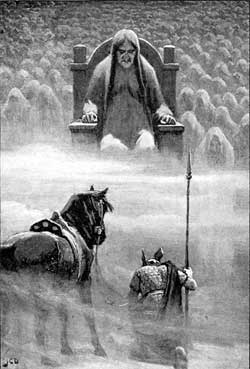 Hel was the daughter of Loki and the giantess, Angrboda.

Hel was the daughter of Loki and the giantess, Angrboda. She had 2 older siblings, the wolf, Fenrir, who was the eldest, and the serpent Jormungand. From the waist up, Hel’s color was pink, but from her hips down, her skin was greenish-black and looked decayed.

Alarmed that Loki had fathered these children, Odin sent a group of gods to kidnap them. Once captured, Odin hurled Hel out of Asgard into the mist and darkness of Niflheim. Odin also decreed that she was now to look after those who died of illness or old age in the nine worlds, and that she should give food to anyone who came to her.

Hel build an estate beyond the sheer rock, Drop to Destruction. Her hall was called Eljudnir, and became the home of the dead. She had a manservant, Ganglati, and a maidservant, Ganglot, both who moved so slowly that it was difficult to tell if they were moving at all.

In the tale of the Death of Balder, Hermod visited Hel to ask for Balder’s life. Hel told him that if everything in the nine worlds, both dead and alive, weeps for Baldur, she would return him to Asgard, but if even one thing will not mourn, Balder must stay in Niflheim.