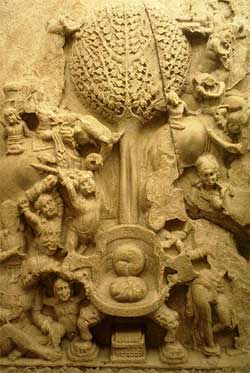 Mara is the evil spirit in Buddhism who tempted Siddharta during the time he sat beneath the Bo Tree and meditated.

Mara (“death” or “thirst”), also called Papiyan (“more wicked”) and Varsavarti (“he who fills desires”), is the evil spirit (or sometimes as simply the personification of evil) in Buddhism who tempted Siddharta during the time he searched for the way, and as he sat beneath the Bo Tree and meditated. During this confrontation, Mara, whose attributes include blindness, murkiness, death, and darkness, attempts to guide Siddharta from the path of enlightenment by tempting him to return to his former ways.

In the Padhana Sutta, the Buddha’s response to Mara’s temptations during his time of asceticism:

“Lust thy first army is called; discontent they second; thy third is called hunger and thirst; thy fourth desire; thy fifth is called sloth and drowsiness; thy sixth cowardice; thy seventh doubt; thy eighth hypocrisy and stupor, gain, fame, honor, and what celebrity is falsely obtained by him who exalts himself and despises others. This, O Namuche, is thine, the Black One’s fighting army. None but a hero conquers it, and whoever conquers it obtains joy. Woe upon life in this world! Death in battle is better for me than that I should live defeated.”

Known as the god of lightning, seduction, temptation, sensuality and death, Mara sent his three daughters – the Lust goddess, the Thirst goddess, and the Delight goddess to distract Siddharta from his meditations. Having failed with this attempt, he and his army of demons began an assault on the Siddharta. Mara attacked with a whirlwind, but that failed. He then caused a rainstorm to drown Siddharta, but Siddharta didn’t even get wet. Next, he caused a shower of rocks, but the rocks changed into bouquets, and a shower of weapons, but they became celestial flowers. He cast a shower of live coals, but they came down harmless, as did hot ashes, a shower of sand, and a shower of mud. Finally, he caused a darkness, but the darkness disappeared before the Buddha. With that, Mara fled, and Siddharta became the Enlightened One.

Mara is said to be homeless, wandering the earth capturing the souls of the dying, and in Hinduism, personifies evil and death & is associated with the demon, Namuche (“Not letting go the waters”). He sometimes takes the shape of a vulture.