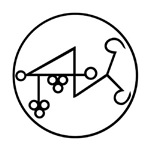 Marax, the 21st spirit, is a great Earl and President, who appears as a great bull with a man's face.

Morax, alias Foraii, a great earle and a president, he is seene like a bull, and if he take unto him a mans face, he maketh men wonderfull cunning in astronomie, & in all the liberall sciences: he giveth good familiars and wise, knowing the power & vertue of hearbs and stones which are pretious, and ruleth thirtie six legions.

The Twenty-first Spirit is Marax. He is a Great Earl and President. He appeareth like a great Bull with a Man’s face. His office is to make Men very knowing in Astronomy, and all other Liberal Sciences; also he can give good Familiars, and wise, knowing the virtues of Herbs and Stones which be precious. He governeth 30 Legions of Spirits, and his Seal is this, which must be made and worn as aforesaid, etc.

Mara
Next Post: Christ’s Descent into Hell in the Teachings of Silvanus