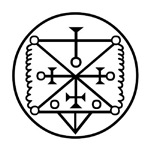 Ose, the 57th spirit, is a great Marquis who appears like a leopard.

Ose [Oze] is a great president, and commeth foorth like a leopard, and counterfeting to be a man, he maketh one cunning in the liberall sciences, he answereth truelie of divine and secret things, he transformeth a mans shape, and bringeth a man to that madnes [or, “drives insanity away”], that he thinketh himselfe to be that which he is not; as that he is a king or a pope, or that he weareth a crowne on his head, DurÃ¡tque id regnum ad horam [and makes the kingdom of time endure (?).]

The Fifty-seventh Spirit is Oso, Ose, or Voso. He is a Great President, and appeareth like a Leopard at the first, but after a little time he putteth on the Shape of a Man. His Office is to make one cunning in the Liberal Sciences, and to give True Answers of Divine and Secret Things; also to change a Man into any Shape that the Exorcist pleaseth, so that he that is so changed will not think any other thing than that he is in verity that Creature or Thing he is changed into. He governeth 30 Legions of Spirits, and this is his Seal, etc.