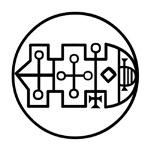 Raum, the 40th spirit, is a great earl appearing in the form of a crow.

Raum, or Raim is a great earle, he is seene as a crowe, but when he putteth on humane shape, at the commandement of the exorcist, he stealeth woonderfullie out of the kings house, and carrieth it whether he is assigned, he destroieth cities, and hath great despite unto dignities, he knoweth things present, past, and to come, and reconcileth freends and foes, he was of the order of thrones, and governeth thirtie legions.

The Fortieth Spirit is Raum. He is a Great Earl; and appeareth at first in the Form of a Crow, but after the Command of the Exorcist he putteth on Human Shape. His office is to steal Treasures out King’s Houses, and to carry it whither he is commanded, and to destroy Cities and Dignities of Men, and to tell all things, Past and What Is, and what Will Be; and to cause Love between Friends and Foes. He was of the Order of Thrones. He governeth 30 Legions of Spirits; and his Seal is this, which wear thou as aforesaid.