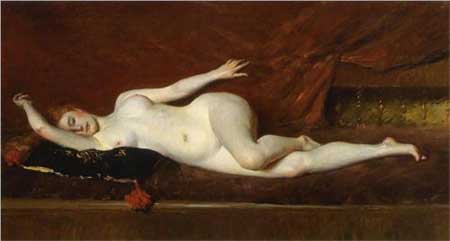 Succubi are the female version of incubi, female demons who take the form of human women to seduce men.

Succubi are the female version of incubi, although the word is actually masculine in medieval Latin because demons were supposedly sexless. The feminine form is “succuba”. It was supposed that incubi outnumbered succubi by 9 to 1.

“And seeing the fauni and nymphs of the words were preferred before the other [spirits] in beauty, they afterwards generated their offspring among themselves, and at length began wedlocks with men, feigning that, by these copulations, they should obtain an immortal soul for them and their offspring but this happened through the persuasions and delusions of Satan to admit these monsters to carnal copulation, which the ignorant were easily persuaded to and therefore these nymphs are called succubi although Satan afterwards committed worse, frequently transchanging himself, by assuming the persons of both incubi and succubi in both sexes for they conceived not a true young by the males, except the nymphs alone.”

One story of a succubus was told by Walter Mapes in his “De Nugis Curialium [Courtier’s Trifles] (approx 1185)” about Gerbert of Aurillac, who became Pope Sylvester II (999-1003). As a young man, Gerbert fell in love with the daughter of the Provost of Rheims. She rejected him, and he became despaired. One day he met a beautiful maiden named Meridiana who offered him sex, magical knowledge, and money if he would only stay faithful to her. He agreed and prospered rapidly becoming Archbishop of Rheims, Cardinal, Archbishop of Ravenna, and ultimately Pope. All the while, he kept Meridiana secret, and she even forgave him when the Provost’s daughter found him inebriated and seduced him one day.

Finally, Meridiana prophesied that Gerbert would die as he celebrated mass in Jerusalem, which turned out to be a church close by possessing an alleged piece of the Cross. Realizing he was about to die, Gerbert made a public confession of his sins and died repentant. Mapes also noted that Gerbert’s tomb in the Lateran sweats copiously before the death of a Pope.