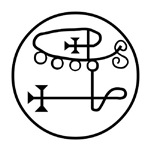 The Sixth Spirit is Valefor, a mighty Duke, who appears in the shape of a Lion with an Ass’s head.

Valefar, alias Malephar [Malaphar], is a strong duke, comming foorth in the shape of a lion, and the head of a theefe [or “barking”], he is verie familiar with them to whom he maketh himself acquainted, till he hath brought them to the gallowes, and ruleth ten legions.

The Sixth Spirit is Valefor. He is a mighty Duke, and appeareth in the shape of a Lion with an Ass’s Head, bellowing. He is a good Familiar, but tempteth them he is a familiar of to steal. He governeth 10 Legions of Spirits. His Seal is this, which is to be worn, whether thou wilt have him for a Familiar, or not.