Aim, the 23rd spirit, is a duke who appears as a handsome man with three heads. 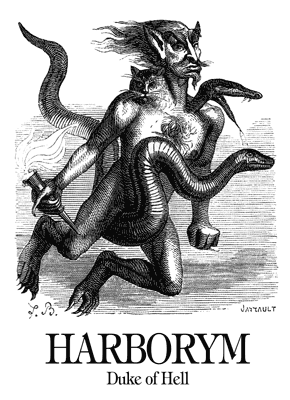 There seems to be some confusion about Aim (aka Aym, Haborym) in demonology texts. Gustav Davidson (1994) identifies Haborym as Raum 1Davidson, Gustav. “Haborym.” A Dictionary of Angels: Including the Fallen Angels. N.p.: Simon & Schuster, 1994. 131. Print. , and Collin de Plancy (1863) mentions that some do identify him as Raum, though he (de Plancy) doubts the two are the same.

Aym / Haborim in the Pseudomonarchia Daemonum

Weir (1583) describes Aym as a Great Duke who commands twenty-six legions. He appears with three heads (a serpent, a man with two stars, and a cat). He rides a viper and carries a torch that can set castles and cities aflame. He makes people witty and answers truthfully concerning private matters.

Aym or Haborim is a great duke and a strong, he commeth foorth with three heads, the first like a serpent, the second like a man having two stars, the third like a cat, he rideth on a viper, carrieng in his hand a light fier brand, with the flame whereof castels and cities are fiered, he maketh one wittie everie kind of waie, he answereth truelie of privie matters, and reigneth over twentie six legions. 2Weyer, Johann. “Aim.” Pseudomonarchia Daemonum. 1583. Esoteric Archives. Web. Jul. 25 2017.

Aim in the Goetia

Mathers (1904) deviates slightly from de Plancy and Weir’s description of Aim, in that he says his third head is like a calf, rather than a cat. 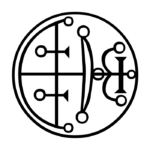 The Twenty-third Spirit is Aim. He is a Great Strong Duke. He appeareth in the form of a very handsome Man in body, but with three Heads; the first, like a Serpent, the second like a Man having two Stars on his Forehead, the third like a Calf. He rideth on a Viper, carrying a Firebrand in his Hand, wherewith he setteth cities, castles, and great Places, on fire. He maketh thee witty in all manner of ways, and giveth true answers unto private matters. He governeth 26 Legions of Inferior Spirits; and his Seal is this, which wear thou as aforesaid, etc. 4Mathers, S. L. MacGregor, Aleister Crowley, and Hymenaeus Beta. The Goetia: the lesser key of Solomon the King: Lemegeton, Book I–Clavicula Salomonis Regis. York Beach, Me.: Samuel Weiser, 1997. Print.