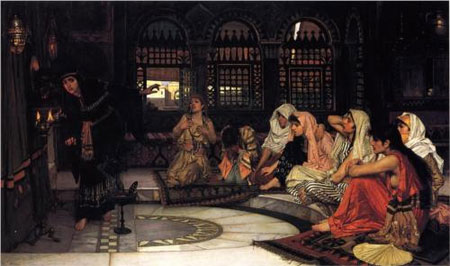 Alexander was a sorcerer in the 2nd century CE whose deeds were written down by Lucian, a man who knew Alexander personally and bitterly despised him.

Alexander was an imposter in the 2nd century CE whose deeds were written down by Lucian, a man who knew Alexander personally and bitterly despised him. He was well known in his own country, a small city in remote Paphlagonia, as well as throughout a large part of the Roman world, however very little is known about him outside of Lucian’s writings.

Alexander the ‘False Prophet’ or ‘Oracle Monger’ claimed he had control over a new manifestation of the god, Asclepius, in the form of a snake he called Glycon which had a human head. Lucian describes him as tall and handsome, ‘truly godlike’ with radiant eyes. He is also extremely intelligent, and comes off as honest, simple minded and naive. All those admirable characteristics make Alexander a true master of deceit and Lucian is completely open about his beliefs that Alexander is a sorcerer and villain.

Alexander learned of the magical arts through a lover who was a professional sorcerer. He then took a partner and the two sold fraudulent medicines and told false fortunes as they traveled throughout the land. Soon, they learned that humans are driven by hope and fear, and by manipulating those emotions in people, they could get rich quickly.

Alexander then transforms himself, calling himself ‘divine Alexander’ and winning the faith of the local Paphlagonians. He concocts an oracle announcing the arrival of a great prophet and Alexander fakes a trance state by chewing root of soapwort to cause foam to form in his mouth. He then brought out the fake snake with a human head.

Well, upon invading his native land with all this pomp and circumstance after a long absence, Alexander was a man of mark and note, affecting as he did to have occasional fits of madness anti causing his mouth to fill with foam. This he easily managed by chewing the root of soapwort, the plant that dyers use but to his fellow-countrymen even the foam seemed supernatural and awe-inspiring. Then, too, they had long ago prepared and fitted up a serpent’s head of linen, which had something of a human look, was all painted up, and appeared very lifelike. It would open and close its mouth by means of horsehairs, and a forked black tongue like a snake’s, also controlled by horsehairs, would dart out. Besides, the serpent from Pella was ready in advance and was being cared for at home, destined in due time to manifest himself to them and to take a part in their show-in fact, to be cast for the leading role. (12)

After an elaborate performance of Alexander proclaiming himself to be god and the people watching amazed and awestruck, they accepted him as god and fell to their knees in prayer. His claim to power is that he now holds Asclepius in the form of Glycon and therefore controls him.

Soon, a temple is built and Alexander establishes his own oracle. Lucian described his operations as follows

When it was time to carry out the purpose for which the whole scheme had been concocted-that is to say, to make predictions and give oracles to those who sought them-taking his cue from Amphilochus in Cilicia, who, as you know, after the death and disappearance of his father Amphiaraus at Thebes,18 was exiled from his own country, went to Cilicia, and got on very well by foretelling the future, like his father, for the Cilicians and getting two obols for each prediction-taking, as I say, his cue from him, Alexander announced to all comers that the god would make prophecies, and named a date for it in advance. He directed everyone to write down in a scroll whatever he wanted and what he especially wished to learn, to tie it up, and to seal it with wax or clay or something else of that sort. Then he himself, after taking the scrolls and entering the inner sanctuary-for by that time the temple had been erected and the stage set-proposed to summon in order, with herald and priest, those who had submitted them, and after the god told him about each case, to give back the scroll with the seal upon it, just as it was, and the reply to it endorsed upon it for the god would reply explicitly to any question that anyone should put.(19)

The operation was a huge scam. People sent in several predictions at a time, while Alexander charged a fee for each. He then sent men into foreign countries to start rumors that he ‘made predictions, discovered fugitive slaves, detected thieves and robbers, caused treasures to be dug up, healed the sick, and in some cases had actually raised the dead’ (22)

Soon, Alexander had a number of adversaries, namely either Epicureans or Christians who could see through his trickery. He concocted another trick to make it look like Glycon answered oracles directly.

Again and again, as I said before, he exhibited the serpent to all who requested it, not in its entirety, but exposing chiefly the tail and the rest of the body and keeping the head out of sight under his arm. But as he wished to astonish the crowd still more, he promised to produce the god talking-delivering oracles in person without a prophet. It was no difficult matter for him to fasten cranes’ windpipes together and pass them through the head, which he had so fashioned as to be lifelike. Then he answered the questions through someone else, who spoke into the tube from the outside, so that the voice issued from his canvas Asclepius. (26)

Lucian’s account of Alexander describes the sorcerer as an imitator who borrows from various religions and cults around him to suit his needs. He is also able to manipulate the emotions of people that seek his help and carefully stages miracles to captivate the masses. At the same time, Lucian is far more intelligent than his naive, superstitious followers.

Apollonius of Tyana
Next Post: Perceptions of Evil – What Makes Someone Evil?