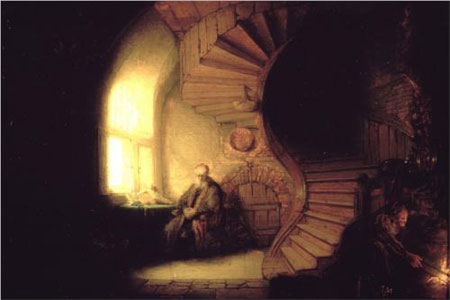 Apollonius of Tyana was an influential Greek philosopher and teacher who influenced science and occultism well after his death.

Apollonius of Tyana was an influential Greek philosopher and teacher who influenced science and occultism well after his death.

At 16, he joined the Pythagorean movement and rejected drinking wine, marriage, eating meat, and animal sacrifice to the gods. Later, he took a vow of silence and traveled throughout Asia minor, visiting Persia, India, and Egypt. His biographer, Philostratus, writing around 220 CE (approx. 2 c. later), professed that Apollonius knew all languages without having studied them, could read minds, understand the language of animals, and could predict the future. He lived a life of asceticism and carried no money. By the 3rd century CE, he rivaled Jesus in the number of miracles he was known for and his biography was commissioned at a time when Christianity was gaining power in Rome.

“(Apollonius) reached ancient Nineveh, where he found a statue in a barbaric style. It was (the moon goddess) Io, daughter of Inarchus, and short horns appeared to be coming from her forehead. While he was lecturing there and gathering more about the image than the priests and prophets (did), Damis the Ninevite became his student. He is the one whom I said in the beginning became (Apollonius’) travel companion and associate in all wisdom. And he preserved many things about the man. He adored him and showed zeal for his way (of life). He said: “Let’s go, Apollonius. You follow God and I (will follow) you. For you also will find me worth much. If I know nothing else, at least I have been to Babylon. I know where cities are, having been up there not long ago. And I know villages in which there is much that is good. And there are several barbaric languages — there is that of the Armenians, that of Medes and Persians, and that of Kadushites. I am familiar with all of them.”

(Apollonius) said: “And I, comrade comprehend them (but) have not leaned a single one.”

(Apollonius) said: “You shouldn’t be amazed because I know all human languages. For I also know whatever humans are silent about.”

When the Assyrian heard this, he worshipped him and even regarded him as a demon. And he stayed with him, Apollonius bestowing wisdom and the other memorizing what he learned.”

– Philostratus, Life of Apollonius of Tyana 1.19

Whether Apollonius was a philosopher or magician has been debated by numerous authors. Lucian believed him to be a charlatan. Origen in Against Celsus 6.41 calls him a magos. St. John Chrysostom wrote

“Tell me then, whence came his great power? ‘He was a sorcerer,’ is the allegation. Then he must have been a unique kind of sorcerer. You have surely heard that sorcerers are and have always been common enough among Persians and the Indians but they never count at all. ‘Ah,’ says he, ‘but the man of Tyana, that impostor and charlatan – he also had a brilliant success.’ Where and when? In a little portion of the world and for a short while he was soon extinguished and abolished, leaving behind him no church, no people, nothing of the sort.’ (in Hom. 4.2.493 M)

During his life, he did not try to found a religion, though he became the hero of a cult well after his life. He did not ask for money for his feats, nor was he interested in astrology and ‘all other supernatural dealings of that kind’ but he was interested in the motivations of the soul. Philostratus emphasizes that Apollonius was not a sorcerer but a philosopher well knowledgeable in science. It is also unlikely that Apollonius knew of Jesus and consciously imitated his works, although in his biography, Philostratus makes him a rival of Christ at times.

Apollonius is said to have performed numerous miracles and exorcisms. He performed healings and exorcisms, could detect ‘spirits and apparitions of idols’, revive a dead girl, talked to Achilles’ ghost. A tree even talked to him. Here’s an exorcism story.

“As (Apollonius) was discussing libations, there was a youth nearby who had such a name for luxury and vulgarity that by then there were even street songs about him. His homeland was Corcyra and he was descended from Alcinus, Odysseus’ Phaecian host.

Apollonius was speaking about libations and told them not to drink from this cup but to keep it untouched and unused for the gods. But when he told them also to put handles on the cup and (in the libation) to pour it over these — since men are less apt to drink (there) —, the youth drowned out his word with loud and course laughter.

Looking up at him, (Apollonius) said:

“These insults are not from you but from the demon who drives you without your knowing it.”

The youth was in fact demon-possessed, for he laughed at things that no one else did. And then he would change to weeping without having any reason to. And he would talk and sing to himself. Now, the people thought that it was the unruliness of youth that led him to do these things. But it was the demon acting. And he seemed to be drunk only because he was then drinking.

Apollonius stared at him and the phantom started uttering sounds of fear and rage, like those who are burnt and tortured. And the phantom promised to leave the youth alone and never take possession of people again. But speaking with anger like a master to a slave who is unstable, mischievous, shameless, and so forth, (Apollonius) ordered him to depart and to provide proof (that he had done so)

“I will knock down that statue,” pointing to one of those on the royal porch. When the statue first shook and then fell, there was more commotion and applause at the marvel than anyone could write about. But the youth just rubbed his eyes, as if he was waking up and saw the sun’s rays. And he won the attention over everyone who turned to him. For he no longer seemed vulgar, nor did he cast his eyes wildly about. But he returned to his natural self, as if he had been medicated. And he threw away the gowns and dresses of Sybarites and developed a love for a rough shirt and cloak and modeled his behavior on that of Apollonius.” – Philostratus, Life of Apollonius of Tyana 4.20