Amon, the 70th spirit, can appear in the form of a wolf with a serpent’s tail. He vomits flames. 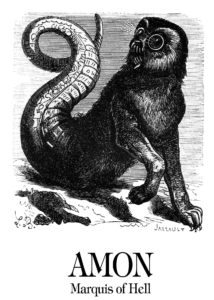 Amon in the Pseudomonarchia Daemonum

Weir (1583) describes Amon as a powerful Marques who rules 40 legions of devils. He appears as a wolf with a serpent’s tail, and breathes flames of fire. When he appears in human form, he has a dog’s teeth and a head like a raven. He knows of past and future things, can procure favor, and can reconcile friends and foes.

Amon, or Aamon, is a great and mightie marques, and commeth abroad in the likenes of a woolfe, having a serpents taile, (spetting out and breathing) [vomiting] flames of fier; when he putteth on the shape of a man, he sheweth out dogs teeth, and a great head like to a mightie (raven) [night hawk]; he is the strongest prince of all other, and understandeth of all things past and to come, he procureth favor, and reconcileth both freends and foes, and ruleth fourtie legions of divels.1Weyer, Johann. “Amon.” Pseudomonarchia Daemonum. 1583. Esoteric Archives. Web.

Amon or Aamon in the Dictionaire Infernal

According to Collin de Plancy (1863), Amon (or Aamon) is a tall and powerful Marquis of Hell who commands 40 legions. He appears as a wolf with a serpent’s tail. He vomits flames. In human form, his head looks like that of an owl and his beak shows canine teeth. He knows the past and the future and can reconcile friends. Interestingly, de Plancy is the only one of the three (Weir, Mathers) that associates Amon with the Egyptian god, Amon, who he calls their supreme god. De Plancy says the Egyptians depicted Amon in human form with blue skin.2Collin De Plancy, Jacques Auguste Simon. “Amon.” Dictionaire Infernal. Paris: Henri Plon, Imprimeur-Editeur, 1863. 10. Internet Archive.

Amon in the Goetia

Mather’s description of Amon is similar to Weir. He depicts Amon as a powerful Marquis who commands 40 legions. He takes the form of a wolf with a serpent’s tail, though in human form, he appears with a raven’s head and dog’s teeth. He knows of the past and future. He can also cause feuds or reconcile controversies between friends. 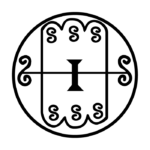 The Seventh Spirit is Amon. He is a Marquis great in power, and most stern. He appeareth like a Wolf with a Serpent’s tail, vomiting out of his mouth flames of fire; but at the command of the Magician he putteth on the shape of a Man with Dog’s teeth beset in a head like a Raven; or else like a Man with a Raven’s head (simply). He telleth all things Past and to Come. He procureth feuds and reconcileth controversies between friends. He governeth 40 Legions of Spirits. His Seal is this which is to be worn as aforesaid, etc.3Mathers, S. L. MacGregor, Aleister Crowley, and Hymenaeus Beta. The Goetia: the lesser key of Solomon the King: Lemegeton, Book I–Clavicula Salomonis Regis. York Beach, Me.: Samuel Weiser, 1997. Print.