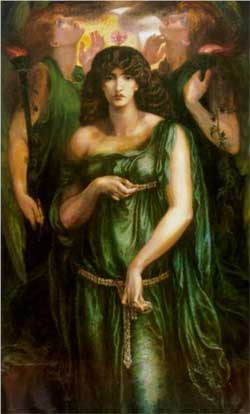 Astarte/Astarot is derived from Ashtoreth of 1 Kings 11:5 "the goddess of the Sidonians."

Astarte/Astarot is derived from Ashtoreth of 1 Kings 11:5 “the goddess of the Sidonians.” The name is derived from the goddess Astarte with the ending distorted to closely resemble the Hebrew boshet, meaning “shame.” Her original name “Astoreth” meant “womb” and she was associated with fertility. It is thought that she and the goddess Anath were the same deity in Biblical times.

In Egypt, Anath and Astarte were two separate deities. They were known, along with the goddess Qadesh, as the “Lady of Heaven.” Of the three, Astarte seemed to be most popular. She was thought to have some relation to Seth and may have been the daughter of the sun god Ra or Ptah. She also seems to be the consort of Moab’s national god, Chemosh.

She is also associated with the Hebrew “Asherah”/”Ashura”, the consort of Yahweh. Other interpretations translate “Astoreth” as “lady”, similar to that of Baal, which means “lord.” A Babylonian title of hers is Qadesh, similar to Qadishtu, meaning harlot.

Astarte is depicted in a number of ways, sometimes with the head of a lioness, cow, or bull. Sometimes she carries a shield and club as she rides into battle naked on her horse or driving her chariot.

Astarte corresponds to the Arabian male deity, Athtar, is identified with Aphrodite, Mylitta, and sometimes Tyche, as well as the Assyrian Istaru.