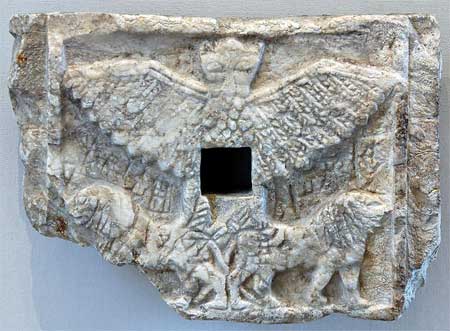 In Sumerian myth, Anzu was a large bird (eagle or vulture) who lived in the realm of the gods.

In Sumerian myth, Anzu was a large bird (eagle or vulture) who lived in the realm of the gods. He was originally a benign creature, but sometime around 2000BC, stories formulated that he rebelled against the gods.

The god Enlil had a number of objects that he would bestow some of his power into and which would then become a source of power for the gods (similar to the rings in Lord of the Rings). In Enlil’s case, one of his main sources of power was his insignia, which included a list of all the “destinies” he had decided his subjects would accomplish (called a Tablet of Destinies). One day while the god was bathing, he took off his insignia and the register of destinies and put it aside. Anzu, who happened to be Enlil’s guard, watched the god with envy and decided to make his move.

‘ I shall take the gods’ Tablet of Destinies for myself,
And control the orders for all the gods,
And shall possess the throne and be master of the rites!
I shall direct every one of the Igigi!’
He plotted opposition in his heart
And at the chamberÂ´s entrance from which he often gazed,
He waited for the start of the day.
While Enlil was bathing in the holy water,
Stripped and with his crown laid down on the throne,
He gained the Tablet of Destinies for himself,
Took away the Enlil-power. Rites were abandoned,
Anzu flew off and went into
Radiance faded, silence reigned

Enlil was enraged by this action and called a meeting among all the gods to find a champion who would fight against Anzu, regain the Tablet of Destinies, and set the word right again. After a number of gods refused the task, believing it to be impossible, Ninurta agreed to the mission.

Soon, a battle ensued between Ninurta and Anzu. Ninurta called upon ‘the seven winds’ and shot at him with arrows, but the great bird held the Tablet of Destinies, which deflected all attacks against him.

As Anzu shouted at it:
“You, shaft that came, return to your reed thicket!
Bow frame, back to your copse!
Bow string, back to the ramÂ´s gut! Feathers, return to the birds!”
He was holding the godsÂ´ Tablet of Destinies in his hand,
And they influenced the string of the bow, the arrows did not come near his body
Deadly silence came over the battle and conflict ceased.
Weapons stopped and did not capture Anzu amid the mountains.’

When that approach failed, Ninurta tried a different strategy designed to tire out the bird – he went after Anzu’s feathers, cutting them, and then pierced him with arrows. When the bird fell, he cut his throat.

Anzu grew weary and in the clash of tempests shed his pinions.
He (Ninurta) took a throw-stick to follow his arrows,
And cut off his pinions, detached both right and left.
He (Anzu) saw his wings and emitted his utterance.
But as he shouted ‘Wing to wing’ a shaft came up at him
A dart passed through his very heart.
He (Ninurta) made an arrow pass through pinion and wing,
A dart passed through heart and lungs,
He slew the mountains, inundated their proud pastures,
Inundated the broad earth in his fury,
Inundated the midst of the mountains, slew wicked Anzu,
And warrior Ninurta regained the Tablets of Destinies for his own hand.