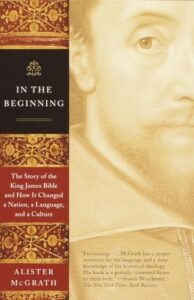 First published in 1611, the King James Bible is still hailed today as a tremendous literary achievement and in some circles, the true authoritative Word of God. In the Beginning tells the story of how this translation of the Bible became so influential.

The Middle Ages were a time of social upheaval as the feudal system collapsed and a new middle class of wealthy, literate merchants emerged and helped restructure Europe. Entrepreneurs began funding private inventions in hopes of striking it rich, and one of the greatest privately funded inventions of the time was Johannes Gutenberg’s printing press. In 1456, he printed the first (Latin) Bible and opened the world up to new possibilities.

With the rise of the merchant class came a greater demand for a Bible in the vernacular. In those days, most nobles and academics spoke either Latin or French, and all Bibles were printed in Latin. English was the language of the lower class and wasn’t taken seriously by nobles until the late 16th century when English nationalism flourished under Elizabeth I.

At the same time, the Catholic Church believed the Bible had difficult passages and it would be dangerous to let laity interpret them without guidance. The laity saw this stance as an attempt to maintain power over them, and soon the Protestant Reformation was in full swing.

In Germany, Martin Luther created a firestorm when he published his 95 theses to the door of Wittenberg castle. He believed so strongly that everyone should have access to the Scriptures in their native language, he translated the New Testament into German in 1522.

By 1526, Reformers in England sought their own English translation, and William Tyndale published his English translation of the New Testament – based heavily on Luther’s work – in Worms. This work was fervently opposed by the bishop of London, who immediately sought to discredit it.
Though highly contested, the Tyndale Bible broke new ground, and by 1535, the first complete English Bible was published by Miles Coverdale. Largely a collection of earlier translations pieced together, it paved the way for later, more accurate translations.

After the Coverdale Bible, a number of other versions cropped up, including the beloved Geneva Bible, published in 1560. This Bible remained the most popular version for almost a full century after it was published mainly because it included notes in the margin that helped the laity understand difficult passages in the bible. It was also the Bible of choice for the Puritans, who would later bring it to America.

When James I came to power in 1603, he found himself in the heart of the religious conflict. England had been struggling to remain neutral while the conflicts between Catholics and Protestants escalated After meeting with a number of Church officials and Protestants, he decided to commission his own translation of the Bible. While he hoped his new translation would calm both sides, his main objective was to create a Bible that didn’t contain the problematic marginal notes the Geneva Bible included – notes that undermined the King’s authority. This translation was finally published in 1611 but didn’t become the translation of choice until the Restoration of Charles II in 1660.

The second part of this book explains guidelines for how translators interpreted biblical verses the problems they ran into when attempting a Bible translation and how the KJV finally became the Bible of choice for Protestants.

McGrath stresses that creating an eloquent, literary masterpiece was not the goal of the KJ translators. They were first and foremost concerned with accuracy. That being said, there were a number of textual issues they had to consider, such as Hebrew idioms, rare words with no English equivalent, the many names for God in the Old Testament, and the differences between classical and New Testament Greek. To clarify, McGrath uses a number of different examples as evidence.

He also points out differences between the KJV and newer translations, such as the Revised Standard Version (RSV). One significant difference is that KJ translators used manuscripts that only dated to the tenth century. Newer versions, like the RSV, are based on manuscripts found more recently – including the Codex Alexandrinus that dates back to the fifth century. While there aren’t significant theological differences, there are differences in how verses were worded.

With In The Beginning, McGrath provides a concise history of how the KJV came into being and shaped both Protestant Christianity and the English language. The information is presented in a logical manner and doesn’t assume its readers have a background in the subject.

My main criticism of the book is that it doesn’t provide foot/endnotes. I would have liked to see references to other materials included in the text rather than just a bibliography at the end. Regardless, this is a great introduction to the KJV and is a must-read for anyone wanting to understand the history, strengths, and limitations of this highly influential book.