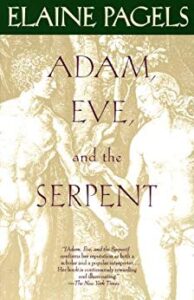 In Adam, Eve and the Serpent, Professor Elaine Pagels looks at traditional roles of gender and sexual relationships as influenced by the Genesis creation story of Adam and Eve during the first four centuries.

Pagels starts with an overview of how Jews during Jesus’ time would have interpreted Genesis, and how those beliefs influenced Jesus and Paul. She contrasts how early Christians differentiated themselves from pagans and Gnostic Christians by following strict sexual practices. They prided themselves on sexual restraint and looked down on polygamy and divorce – which Jewish tradition allowed, particularly if the marriage hindered God’s command to be fruitful and multiply. To combat pagans, they took a strong stance against homosexuality (a common part of male education), prostitution, and abortion.

This strict stance against sexual deviance continued to gain popularity well after Jesus and Paul’s deaths. For instance, a century after Paul’s death, the tale of Paul and Thecla was widely known. In this story, a girl named Thecla heard Paul preach in her town and decided to give up a comfortable life as a wealthy wife preach to dedicate her life to God’s teachings. After much turmoil, she was able to convince her fiancé to accept baptism and live with her in celibate marriage. The story was incredibly popular among sects of Christians who tried to persuade men and women to ‘undo the sin of Adam and Eve’ by choosing celibacy, though was eventually determined to be a forgery.

Similarly, many of the early Church fathers such as Justin the Martyr, Clement of Alexandria, and Tertullian were extremely vocal in the Christian community and wrote passionately against what they considered corrupt Roman sexual practices including selling infants into slavery and grooming children for prostitution. Through their teachings, the notion of religious freedom and the intrinsic value of each human being became popular.

The Gnostics also relied heavily on the interpretation of the Adam and Eve story. Unlike the Church Fathers, who stressed a distinct gap between themselves and their Creator, many Gnostics emphasized that the divine being could be found deep within human nature. To them, it was the fall of Adam and Eve that distanced humanity from its Creator.

Some Gnostics adopted a pattern of interpretation similar to Philo’s but changed the content. Instead of characterizing human psychodynamics, as Philo had, in terms of an interaction between mind and sensation, Gnostics pictured it in terms of the interaction of soul and spirit – that is, between the psyche (ordinary consciousness, understood to include both mind and sensation) and the spirit, the potential for a higher, spiritual consciousness. Many Gnostics read the story of Adam and Eve, consequently, as an account of what takes place within a person who is engaged in the process of spiritual self-discovery.

Eventually another debate arose in the Christian community between Jerome and Jovinian concerning abstinence. Jovinian rejected the belief that celibate people or people who abstained from food or wine were holier than those who married or who enjoyed such foods. To him, so long as a person remained faithful to their baptismal vows, they could expect reward in heaven. Jerome argued bitterly against his opponent, describing the main conflict as such:

He puts marriage on a level with virginity, while I make it inferior he declares that here is little or no difference between the two states I claim that there is a great deal. Finally… he has dared to place marriage on an equal level with perpetual chastity. (Letter 48, To Pammachius, 2)

Finally, in the 4th century, Augustine developed what would become the foundation for modern Christianity – the concept of original sin which resulted from the fall of Adam and Eve. Augustine converted to Christianity later in life and continued to struggle against his own sexual desires. That internal struggle became the basis for much of his own theology, including the belief that sexual desire (libido) was the direct result of Adam and Eve’s sin of disobedience. Pagels summarizes Augustine’s belief as follows:

Although originally created equal with man in regard to her rational soul, woman’s formation from Adam’s rib established her as the ‘weaker part of the human couple.’ Being closely connected with bodily passion, woman, although created to be man’s helper, became his temptress and led him into disaster. The Genesis account describes the result: God himself reinforced the husband’s authority over his wife, placing divine sanction upon the social, legal, and economic machinery of male domination.

Pagels writes with clarity, tackling difficult and complex arguments in a logical manner, and writing for the lay person rather than the academic. Many of her chapters deal directly with the ongoing debates during the time – Jerome vs. Jovinian, Augustine vs. John Chrysostom – showing the reader how passionate these debates were and how influential these ideas became to modern Christian beliefs. I highly recommend this book to anyone interested the development of modern Christian beliefs regarding gender and sexual practice, as well as those looking for a greater understanding of Adam and Eve.