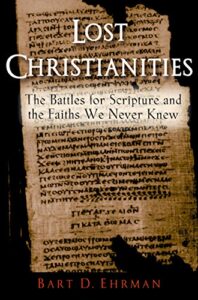 Bart Ehrman’s Lost Christianities: The Battle for Scripture and the Faiths We Never Knew provides a fascinating overview of the events, writings, and politics that eventually led to the New Testament as we know it today. The road to canonization wasn’t as clear-cut as the Church would like us to believe, and Ehrman does an excellent job of explaining the many flavors of early Christianity that flourished side-by-side with the brand of Christianity we now consider orthodox.

The first part of this three-part book describes early and modern forgeries of early Christian writings. Here, Ehrman makes a case for why early writers penned documents under the names of the apostles. The writings he mentions were considered to be authentic at one point, but over time, their authenticity was questioned and in some cases, forgery was proven. He uses four documents as evidence: the Gospel of Peter, The Acts of Paul and Thecla, the Coptic Gospel of Thomas, and the Secret Gospel of Mark. Of the four, he provides strong evidence that the Secret Gospel of Mark is a modern forgery created by a clever scholar in the mid-1900s.

The second part of this book contrasts a number of prominent Christian thinkers of antiquity. Ehrman details the beliefs of the Ebionites and the Marcionites – two groups that considered themselves Christians, much to the dismay of the early Church Fathers, which he dubs proto-orthodox, as well as an overview of Gnosticism in general.

Throughout the book, he asks whether Gnosticism could have won dominance and possibly became the orthodox view of Christianity. He eloquently explains:

Is it conceivable that Gnostic Christianity could have eventually won out in this struggle for dominance? Certainly, the proto-orthodox leaders felt the pressure of these groups otherwise, we would be hard-pressed to explain the massive expenditure of time and energy devoted to rooting out the Gnostic heretics, spurning their views, maligning their persons, destroying their writings, eliminating their influence. And one can certainly see why the Gnostic views won a following. Here were Christian groups that were fearless in their denunciation of our material existence: This world is not just fallen it is inherently evil, a cosmic catastrophe it is a place to be escaped, not enjoyed. It may seem acceptable on one level simply to say that humans have corrupted it. You can account for war and oppression and injustice simply by pointing the finger at someone else. But the suffering of this world is far deeper than that: droughts that bring massive starvation, unstoppable floods, volcanoes that devastate entire populations, rampant disease, pain that wracks the body, infirmity, death. The Gnostics took the suffering of this world seriously, and they turned their backs on it. This, they argued, cannot be laid at the feet of God.

God is good, true, and perfect. And some of us belong to him. We may feel alienated here. If so, it is for good reason. We arealienated here. We are not of this world we belong to another world. The story of how we got here is filled with mystery it can be told only as a myth, not as a propositional statement of historical fact. We came to be here by a cataclysmic rip in the fabric of reality, a cosmic disaster, a tragic mistake. But we can escape this world and all that it holds we can return to our heavenly home we can become united with God, once again, as we originally were.

To Ehrman, the term proto-orthodox (which he uses to mean what will become orthodox) is somewhat problematic because it assumes that orthodox beliefs were always true and concrete. This certainly isn’t the case, as the boundaries were always shifting. What we now consider orthodox came about through three centuries of discussion and in particular, how to differentiate Church beliefs from that of prominent Gnostic leaders who used the same scriptures but had radically different interpretations. To complicate matters, the Church fathers didn’t always agree among themselves. Even Acts gives an account of how Peter and Paul had differing views of what should be considered Christian beliefs. Remember, at this time, there was no such thing as the New Testament – people had a wide variety of scriptures to choose from and there was no such thing as a bounded packet of the 27 books we think of as orthodox that people could refer to and refute or clarify ideas.

Part three then takes us through the process of how Christian beliefs came to be orthodox as written in the Nicene Creed of the 4th century. He is quick to point out that defining heresy as any belief that deviates from the orthodox (right belief) is misleading when discussing Christian origins. Up until the late 18th century, everyone believed that what the Church taught was the right belief – that what was passed down to us through the centuries was historically what Jesus taught. However, after studying the texts and with various archaeological findings (in particular, the Nag Hammadi library found in 1945), scholars began to see a new picture emerging.

Christianity was far more diverse, the battle lines were far more blurred, the infighting was far more intense than we could have known to depend just on Eusebius and the classical view of the relationship of orthodoxy and heresy.

One of the most interesting pieces of evidence to support this is Ehrman’s comparison of early manuscripts we have and how certain passages were changed to support the proto-orthodox view. He also details how some of the early church historians like Eusebius wrote to push their own agendas rather than give an unbiased history of what was actually happening.

Overall, Lost Christianities is an excellent introduction to Christian origins and the political and spiritual battles that raged as the proto-orthodox Church Fathers fought long and hard to stamp out their Gnostic opponents and how with new scriptures and archaeological finds, we can now piece together what actually happened versus what has been passed to us as orthodox by tradition.