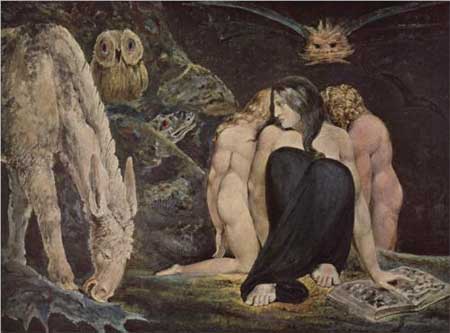 Hecate, also called Agriope ("savage face"), was the daughter of the Titan Perses and of Asteria.

Hecate, also called Agriope (‘savage face’), was the daughter of the Titan Perses and of Asteria, although sometimes it is said that Zeus himself fathered her, and she is the mother of Scylla. It is thought that she was also known as the dark side of the goddesses, Artemis, Selene, or Diana. She was said to have three faces, symbolizing her power over the underworld, earth, and air, thus she is sometimes depicted with a three heads, that of a dog, a horse, and a lion. Sometimes she is also portrayed with a torch or with a back of hounds. She was only worshiped at night by torchlight and dogs and black lambs were sacrificed to her.

Hecate is goddess of the underworld, of chthonic rites, and of black magic as well as goddess of night and darkness. She may also have been a moon goddess representing its terror and darkness just as Diana represented the moonlight splendor. Medea was her priestess to whom she taught the art of magic.

Medea then [they found] going from chamber to chamber in search of her sister, for Hera detained her within that day; but before time she was not wont to haunt the palace, but all day long was busied in Hecate’s temple, since she herself was the priestess of the goddess.
The Argonautica (ll. 210-259)

According to the Homeric Hymn to Demeter, Hades abducted Persephone, the daughter of Zeus and Demeter, and forced her to live with him in the underworld. During Demeter’s search for her daughter, she met Hecate, who admitted she too had heard Persephone’s cries for help but didn’t know who abducted her. Helios told Demeter that Hades was Persephone’s abductor, and that Zeus had given him permission to do that. Demeter grew angry at this and protested by preventing all grain from growing until her daughter was given back to her. Hades propositioned Persephone to stay with him, and before she left, secretly gave her some pomegranate seed, so that she could never permanently stay in the light. Demeter was horrified at this action, and entrusted Persephone to Hecate:

‘Then bright-coiffed Hecate came near to them, and often did she embrace the daughter of holy Demeter: and from that time the lady Hecate was minister and companion to Persephone.’ Hymn to Demeter (439-441)

Hecate isn’t always seen as a dark goddess. Hesiod wrote about Hecate received great honors by many, including Zeus.

Again, Phoebe came to the desired embrace of Coeus.

Then the goddess through the love of the god conceived and brought forth dark-gowned Leto, always mild, kind to men and to the deathless gods, mild from the beginning, gentlest in all Olympus. Also she bare Asteria of happy name, whom Perses once led to his great house to be called his dear wife. And she conceived and bare Hecate whom Zeus the son of Cronos honoured above all. He gave her splendid gifts, to have a share of the earth and the unfruitful sea. She received honour also in starry heaven, and is honoured exceedingly by the deathless gods. For to this day, whenever any one of men on earth offers rich sacrifices and prays for favour according to custom, he calls upon Hecate. Great honour comes full easily to him whose prayers the goddess receives favourably, and she bestows wealth upon him; for the power surely is with her. For as many as were born of Earth and Ocean amongst all these she has her due portion. The son of Cronos did her no wrong nor took anything away of all that was her portion among the former Titan gods: but she holds, as the division was at the first from the beginning, privilege both in earth, and in heaven, and in sea. Also, because she is an only child, the goddess receives not less honour, but much more still, for Zeus honours her. Whom she will she greatly aids and advances: she sits by worshipful kings in judgment, and in the assembly whom she will is distinguished among the people. And when men arm themselves for the battle that destroys men, then the goddess is at hand to give victory and grant glory readily to whom she will. Good is she also when men contend at the games, for there too the goddess is with them and profits them: and he who by might and strength gets the victory wins the rich prize easily with joy, and brings glory to his parents. And she is good to stand by horsemen, whom she will: and to those whose business is in the grey discomfortable sea, and who pray to Hecate and the loud-crashing Earth-Shaker, easily the glorious goddess gives great catch, and easily she takes it away as soon as seen, if so she will. She is good in the byre with Hermes to increase the stock. The droves of kine and wide herds of goats and flocks of fleecy sheep, if she will, she increases from a few, or makes many to be less. So, then. albeit her mother’s only child, she is honoured amongst all the deathless gods. And the son of Cronos made her a nurse of the young who after that day saw with their eyes the light of all-seeing Dawn. So from the beginning she is a nurse of the young, and these are her honours.
– Theogony of Hesiod (ll. 404-452)