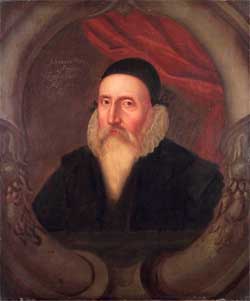 John Dee (1527-1608) was a renowned philosopher, mathematician, geographer, and navigator during the 16th century’s Elizabethan Renaissance. He was educated in Cambridge and served as court astrologer to Queen Elizabeth I – even predicting her coronation would be in 1558. Nowadays, Dee is most well known for his conversations with angels.

Dee was very well respected during the early parts of his career, often in contact with higher ups in British society and the Catholic Church, and amassing for himself one of England’s finest libraries. In 1582, Dee made a failed attempt to introduce the Gregorian Calendar to England, and this was also the year he met Edward Kelley. During 1583-1589, Dee spend much of his time pursuing occult sciences and touring Europe with his wife and Kelley. At times, they even stayed with the King of Poland and the Emperor Rudolf in Prague

In 1584, Dee started to find himself in hot water with Giovanni Francesco Bonomi, the bishop of Vercelli, for offering to reveal some of his angelic revelations with Rudolf II, the Holy Roman emperor. At that time, the Church didn’t deny that Dee and his scryer, John Kelley’s conversations with celestial beings were real – but they did question whether evil spirits were involved. Basically, the Church believed that because Dee had a wife, and therefore was concerned with “worldly” matters, he couldn’t possibly be in contact with good angels, for only very holy, celibate hermits received such visits.

In 1589, he and Kelley parted and Dee and his wife returned to England. Upon Dee’s return, he found few offers for patronage, and soon fell upon difficult times financially. In 1596, Queen Elizabeth made him Warden of Christ’s College in Manchester until King James took over and the witch-hunts began in full swing. Dee resigned in 1905 and died shortly after in 1608.

Soon after, he was branded as a conjurer and demonized by 17th century historians. It has only been recently, with the works of modern scholars such as Frances Yates, Nicholas Clulee and Deborah Harkness, that Dee’s true intellectual contributions to the Renaissance have been explored in a positive light.

Scrying was a method of divination that involved looking into a shiny or reflective object to aid in prophecy. Angels would appear in the reflection and the scryer would hear a voice – scryers were not mediums and the angels did not speak through them. Dee believed wholeheartedly that what the angels/spirits/intelligences told him through his scryer was true and obeyed their commands religiously.

He had at least four scryers during his lifetime including Barnabas Saul, Edward Kelley, his son Arthur Dee, and Bartholomew Hickman. Barnabas Saul participated in his first conversation on December 22, 1581 though later denied he had seen anything. Dee wrote in his diary a few months later that “The injuries which this Barnabas had done me diverse wayes were very great.”

Edward Kelley, the scryer most often associated with Dee nowadays, began working with him on March 10, 1582. Very little is known about Kelley’s life. He was born on Aug 1, 1555 and attended Oxford as “Edward Talbot.” His relationship with Dee was unstable and sometimes violent, and the men quarreled frequently, yet Dee continued to work with him because he needed a scryer to communicate with the angels.

Many of the angels appeared as men in his crystal, though a few had female form. Dee was suspicious that those that appeared as female were actually demonic spirits, but after a few conversations he was convinced otherwise.

Many had familiar names – Gabriel, Michael, Raphael, and Uriel – though the majority was not. Gabriel, for instance, first appeared on June 22, 1583. He guarded Eden and was the angel of annunciation, resurrection, and revelation. Other angels considered him guardian of the moon. And at one point, he sent divine medicine to heal Dee’s wife, Jane. In Islamic traditions, Gabriel dictated the Koran to Mohammad. In cabalistic traditions, Gabriel delivered the cabala to humanity. And according to Trithemius’s De spetem secundeis, Gabriel oversaw the historical period beginning in 1525 AD, the time Dee lived.

Dee also had frequent communications with Michael (“strength of God”), the guardian of Jacob and Israel, who first appeared on March 14, 1582. Michael would weigh human souls at the Last Judgment and wielded his sword of justice. Trithemius claimed Michael was guardian of the sun and Agrippa considered him guardian of the metal quicksilver. Both equated him with the planet Mercury in alchemy.

Raphael (“healing power of God”) first communicated with Dee on March 15, 1582. In the Zohar, he is associated with healing the earth and humanity, and is also the guardian of the Tree of Life and therefore associated with knowledge and knowledge of the future. Both Trithemius and Azalus claimed he was one of the 7 angels of the apocalypse.

Uriel (“light of God”) was the first angel to speak with Dee after Kelley started scrying for him. In cabalistic lore, Urial gave humanity knowledge of the cabala and alchemy.

Anael (“the favored, wretched misery of God”) was one of the seven angels of creation and had power over all things, good and evil and was the guardian of Venus.

Dee wrote a number of books before he began his angelic conjurations. Some of these include the following his first esoteric book, Monas hieroglyphica, written 1564. Dee wrote this book over a period of 13 days (Jan 13-25, 1564) in Antwerp, though he mentions it was the result of a 7-year gestation. The text consists of the primary symbol and the accompanying text of 24 theorems with diagrams.

The Angels revealed several books to Dee starting in 1583, during his work with Kelley. Surviving manuscripts of these books can be found in the British Library. These works include:

Liber Logaeth – the Book of the Speech of God. This book was Dee’s introduction to the angelic language, a language now referred to as “Enochic” which was to play a role in perfecting the world. The Liber Logaeth consisted of 49 calls and 95 tables consisting of smaller squares with letters placed in them. Dee was instructed to complete this book four days after March 29, 1583.

De heptarchia mystica This reference encyclopedia contained prayers to specific angels including the days and times these prayers were to be said on as well as the seals for the 19 elemental angels.

48 Claves angelicae – the Angelic Keys. This book, written in both English and angelic, contained 48 revelations prophesized by the angels.

Book of Soyga. This long lost book was first mentioned in Dee’s diary on January 17, 1582. The angel Uriel described it as a good that “God’s good angels revealed to Adam in Paradise.” Michael was its interpreter. By mid April 1583, the angels had discredited the work and it was lost or stolen until a copy (or forgery) was rediscovered in December 1595. The book is primarily astrological in nature.

There are a number of books revealed to Dee that didn’t survive. At one point, the angels commanded Dee to burn a number of his books including 48 companion books to the 48 Claves angelicae, an English translation of the 48 Claves, and a book called the “Mystery of Mysteries and the Holy of Holies” that Dee had not deciphered at the time. Also, a number of manuscripts were burned after his death.