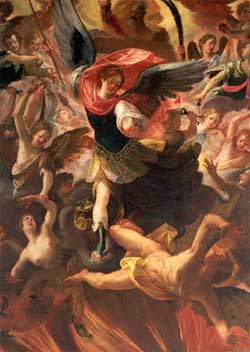 Lucifer was once one of the Seraphim who rebelled against God and was cast out of heaven.

The name ‘Lucifer’ means “light-bearer,” and is not used in the New Testament, where the “bearer of light” is Christ. Lucifer was once one of the Seraphim who rebelled against God and was cast out of heaven.

Lucifer, Son of the Morning

“How art thou fallen from heaven
O day-star, son of the morning! (Helel ben Shahar)
How art thou cast down to the ground,
That didst cast lots over the nations!
And thou saidst in thy heart:
‘I will ascend into heaven,
Above the stars of God (El)
Will I exalt my throne;
And I will sit upon the mount of meeting,
In the uttermost parts of the north;
I will ascend above the heights of the clouds;
I will be like the Most High (Elyon).’
Yet thou shalt be brought dow to the nether-world,
To the uttermost parts of the pit.”
– Isaiah 14:12-15

This is the only passage in the bible that mentions Lucifer. In Christian tradition, this passage is proof for the fall of Lucifer.

However, it is more probable that this passage is an allusion to a Canaantie or Phoenician myth about how Helel, son of the god Shahar, sought the throne of the chief god and was cast down into the abyss because of this. Evidence for this theory comes from an Ugaritic poem about two divine children, Shachar (dawn) and Shalim (dusk), who were born as the result of the intercourse of the god El with mortal women. That would make El, Elyon, and Shahar members of the Canaanite pantheon and the “mount of meeting” is the abode of the gods, which corresponds to Mount Olympus in Greek mythology. Unfortunately, this is just speculation as archaeologists have not uncovered any Canaanite sources that describe Helel ben Shahar or a revolt against Elyon.

Many Apocalyptic writers interpreted this passage as referring to Lucifer, and wrote about the fall of the angels. 1 Enoch refers to the falling angels as stars (see the watchers) and may be the beginning of the overlap between the story of the watchers and Isaiah.

Later authors, such as St. Jerome, associate Ezekial 28:13-15 with Lucifer, the greatest of the fallen angels. It has been argued that this passage was actually addressed to Nebuchadrezzar.

“You were in Eden, the garden of God;
Every precious stone was your adornment:
Carnelian, chrysolite, and amethyst;
Beryl, lapis lazuli, and jasper;
Sapphire, turquoise, and emerald;
And gold beautifully wrought for you,
Mined for you, prepared the day you were created.
I created you as a cherub
With outstretched shielding wings;
And you resided on God’s holy mountain;
You walked among stones of fire.
You were blameless in your ways,
From the day you were created
Until wrongdoing was found in you
By your far-flung commerce
You were filled with lawlessness
And you sinned.
So I have struck you down
From the mountain of God,
And I have destroyed you, O shielding cherub,
From among the stones of fire.”

Later interpretations of the fall tell that Lucifer was upset because God the Father made Lucifer’s brother, Jesual, the Son. From his head, he gave birth to Sin, and by copulating with her, fathered Death. He was then cast out of heaven.

Lucifer in Egypt and Babylon

There are characters similar to Lucifer in other mythologies. In Egypt, there is a serpent god, Sata, whi is father of lightning and who likewise fell to earth. A Babylonian god, Zu, was also a lightning god who fell as a fiery flying serpent.

According to some magicians, Lucifer rules over the East and commands the Europeans and the Asians. He is often referred to as the king of hell, and is superior to Satan according to some demonologists. He was evoked on Monday in the middle of a circle which contained his name and remained content when a mouse or venison-bit was offered to him. One says he is facetious, and that he often pulls witches off brooms on their journey to the Sabbath and gives them a ride on his shoulders. The witches of Moira in Sweden attested this in 1672. They also describe Lucifer as gray with blue arms and red culottes decorated with ribbons. Lucifer has the face of a beautiful young child, which changes to monstrous and inflamed when he is angry. According to some demonologists, he is a lover of justice in hell. He is also the first to be invoked in litanies of the Sabbath.

Lucifer: From Latin, Lux, Light, and Fero, to bear, – A Light Bearer. There is a name ‘Lucifuge’ also employed occasionally, from Lux, Light, and Fugio, to fly from, – He who shuns the Light.