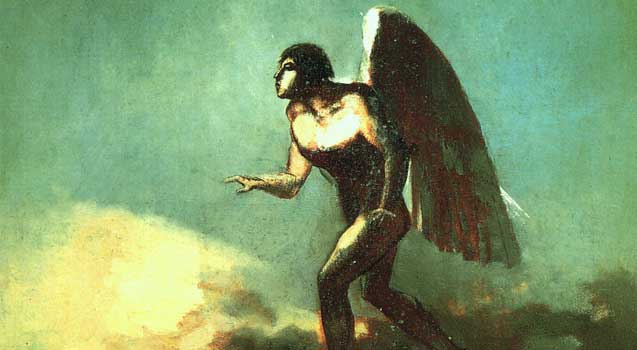 The Book of Enoch is a non-canonical Jewish work attributed to Enoch, the great-grandfather of Noah. The book is thought to date to about 300 BC and includes a detailed account of the fall of the angels in its section, the Book of the Watchers.

Background of the Book of Enoch

The Book of Enoch, ascribed to Enoch, is a non-canonical text used by various Jewish sects including the Dead Sea Scrolls community during the Second Temple period. It consists of 5 separate books that have been combined into one document: the Book of the Watchers (1-36), the Similtudes (Parables) of Enoch (37-71), the Astromonical Book (72-82), the Book of Dreams (83-90), and the Epistle of Enoch (91-107). including the Apocalypse of Weeks (93:1-10; 91:11-17). Aramaic fragments of all sections of the Book of Enoch except the Similtudes and the concluding discourse (108) have been found at Qumran.

The earliest of the Enochic corpus found at Qumran is the Astronomical Book, which dates to the third century BCE and consists of insights and revelations Enoch passes on to his son Methuselah from the angel Uriel. The majority of the book contains information on the solar and lunar calendar systems and on the astronomical positions of the heavenly bodies.

The book presents Uriel, whose name means ‘light of God’ or ‘flame of God’ as the teacher of the true calendar. He also is the leader of the angels who control the heavenly bodies in relation to the calendar. 1 En 82:1 mentions that all of the stars have their angelic guides and then continues with descriptions of each angel’s appointed role over the stars and the seasons. Finally, Uriel allows Enoch to read “the book of the heavenly tablets,” which contains “all the deeds of humanity and all the children of the flesh upon the earth for all the generations of the world.” (1 En 81:1-3)

This verse indicates that the course of human existence has been predetermined and recorded, thus showing a strong deterministic outlook. The chapter is distinct from the rest of the book because of its lack of cosmological interest and the way it presents itself as an early apocalypse. Several scholars have proposed that this chapter is a later work that has been incorporated into the book after the Book of Dreams was composed. Martinez points out that copies of these chapters were not found at Qumran, admitting that this could easily be explained by the accidents of transmission and by the poor condition in which the fragments are now known, but he suggests that this supports the belief that the original work did not contain this chapter and was later inserted.

The Book of the Watchers

The Book of the Watchers is the second oldest book in the Enochic corpus and the oldest apocalypse known providing chapter 81 of the Astronomical Book was a later insertion. The earliest of the Qumran texts date to the beginning to the middle of the second century BCE. This text appears to be a composite of stories and traditions written by a number of different people. 4QEna and 4QEnb seem to contain only this writing providing evidence that the text may have circulated independently of the other sections of the Book of Enoch.

Chapters 1-5 serve as an introduction to the rest of the book, beginning with a distinction between the “chosen and righteous” and the “wicked and impious,” and continuing with along eschatological paradigm concerned with the final judgment of the righteous and the wicked. Enoch serves as the prophet and foretells God’s coming to judge. Mention is made to the Watchers, who are said to ‘quiver’ at the revelation of God (1 En 1:5). Chapters 2-5 present the coming judgment is a different manner, as in the wisdom literature. Reference is made both to those who choose to follow the law and to those who willingly choose a path of sin and wickedness, and as a result, Enoch pronounces curses on the wicked, but predicts a blessed state for the “chosen” where they will remain free from sin.

Book of the Watchers: Sin of the Angels

The second section major section is composed of chap 6-16 and presents stories about the descent and sin of the angels (6-11) and about Enoch’s mediation of the Watchers’ petition to God (12-16). There are two main stories about the descent of the angels: the first focuses around Shemihazah while the second focuses around Asa’el (The name Asa’el instead of Azaz’el comes from the earlier Aramaic fragments found at Qumran – 4QEnochb).

The story of Shemihazah includes several major elements. The Watchers look down from heaven and desire the daughters of men (6:1-8). They swear an oath to fulfill their desires and then descend, marry women, and defile themselves with women (7:1). While they are on earth, they teach women about charms, spells, root-cutting, and plants (7:1), and various other arts including astrology (8:3). The women then give birth to giants who consume all the human food supplies, and turn to cannibalism (7:2-5). The oppressed human survivors petition heaven for help against the giants, and their cries are heard by the angels who did not descend (8:4; cf 7:6). These angels present the situation to God (9:1-5,7-11), who consequently orders the giants to be slain (10:9-10) and the Watchers to be imprisoned beneath the hills until the day of judgments (10:11-12) when they will be imprisoned in the fiery abyss (10:13).

The story involving Asa’el differs in several ways. Asa’el educates humankind of heavenly secrets that lead humankind to sin. These teachings include making weapons of war and preparing cosmetics, which enabled the women to seduce the angels (8:1-2). The angels then charge Asa’el before the Lord with crimes of revealing the heavenly secrets which mankind was not supposed to know (9:6). Raphael was then assigned to punish Asa’el by binding him hand and foot and throwing him into the darkness among the sharp and jagged rocks, where he would remain until the day of judgment when he would be hurled into the fire (10:4-5). The story then claims that “the whole earth has been corrupted by [Asa’el’s] teachings of his (own) actions; and write upon him all sin.” (10:8) . It was because of Asa’el’s teachings that God sent the Flood to destroy the evil in the world (10:1-3) including even the souls of the giants (10:15), so that all evil will be wiped away from the face of the earth.

Book of the Watchers: Cause of Sin Entering the World

The cause of sin entering the world is different in each of these stories. In the Shemihazah story, sin enters the world through contamination by marriage between angels and humans and the procreation of giants, whereas in the Asa’el story, sin enters through his revealing of heavenly secrets. The Asa’el narrative also implies that the time before the angelic transgression was therefore free of evil.

Both of these stories can be compared to the Genesis story about the sons of God and the daughters of men (Gen 6:1-4) , but both have elaborated on the text. For example, while Genesis presents the intermixing of the angels and women and the offspring of their union in a neutral way, both 1 Enoch narratives present the interaction between angels and humans as the root of evil and violence. Later passages in Genesis 6 explain that the human heart is inclined towards evil, and that God sent the Flood to destroy the wickedness in the world without connecting humanity’s sins to the transgressions of the Watchers, whereas the Enoch passages explain that evil entered the world through the angels.

Book of the Watchers: Enoch as Intermediary

After the stories of the fall of the Watchers (chs. 6-11), Enoch is reintroduced again in ch. 12. Here, he serves as an intermediary between God and the fallen angels, and partially performs the jobs given to Raphael (the punishment of Asa’el in 10:4-6) and Michael (the punishment for Shemihazah and his colleagues in 10:11-13). Enoch also intercedes for the Watchers and reprimands them (13:4,6-10;14:1,3-7;15:2;16:2-4) – an element that demonstrates the role reversals between the Watchers and Enoch. It was the angels’ duty to intercede for humankind (15:2), but they instead mislead humankind into corruption (15:2-16:4). On the contrary, Enoch, who should have received the benefits of angelic assistance, acted as the mediator for the Watchers.

Book of the Watchers: Angels’ Punishment

Enoch also explains why the Watchers have been punished. He states that the angels had become contaminated when they united with humans because they were pure spirits (15:6-7) who did not need to procreate since they did not perish. The offspring of this union, the giants, were killed, however, their souls remained upon the earth to assault humans and produce evils (15:11). In this sense, God was able to eliminate most of the evil produced by the angels, but not all, hence evil can still be accounted for in the world.