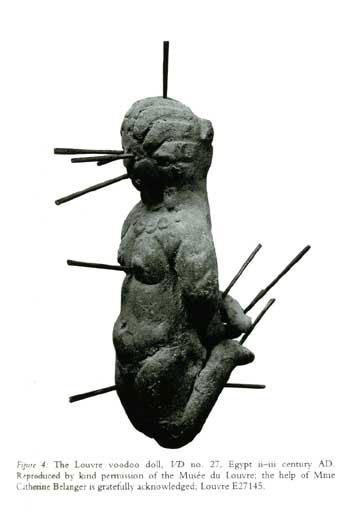 Voodoo dolls (or kolossoi as the Greeks called them) were also quite popular in the Greco-Roman world.

Voodoo dolls (or kolossoi as the Greeks called them) were also quite popular in the Greco-Roman world. C.A. Faraone, in his survey of all known voodoo dolls, set specific criteria – the dolls must meet at least 2 of the following criteria to be included:

How Voodoo dolls Were Used

Voodoo dolls were not as common as curse tablets, though they still were prevalent. They were commonly made of lead or bronze. Wax dolls were found in Egypt in late antiquity. The dolls were placed in a variety of places, with graves being the most popular. Other places included homes, sanctuaries, and in what used to be bodies of water. Plato mentioned that dolls were displayed at points where three roads met, on doors and on parental graves (Laws 933a). They are often represented as bound and twisted into violent positions. Occasionally, the dolls were mutilated (hands, legs, head, etc chopped off) or if wax, melted.

Dolls were often associated with curse tablets in that they were often inscribed with the name of the curse victim. A lead ‘gingerbread man’ from Carystus was apparently crafted so that it could be flattened and used as a curse tablet.

Like the curse tablets, if the dolls were found, the curse could be deactivated. Sophronious (late vi CE) tells of how Theophilus of Alexandria was rendered tetraplegic. His friends had summoned the devil to instill pain in all of his limbs. Saints appeared to Theophilus in dreams and told him to hire a fisherman to go out to sea. The fisherman caught a small box that was locked and sealed with lead in his net. Inside was a bronze effigy of Theophilus with a nail driven though each limb. As each nail was withdrawn, Theophilus was released from his pain and paralysis in the corresponding limb. (Sophronius, Account of the miracles of Saints Cyrus and John)

Here’s a picture of one of the most elaborate ancient voodoo dolls from the 2-3 centuries CE.