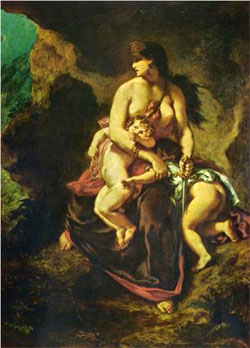 Medea was known as a sorceress who used her magic to fight a monster called Talos during Jason's quest to obtain the Golden Fleece.

Medea in The Argonautica

The Argonautica by Apollonius of Rhodes was written during the 3rd century BCE and tells the story of Medea, who fell in love with Jason, the leader of the Argonauts, and helped him obtain the Golden Fleece. She was known as a sorceress and was able to use her magic to fight a monster called Talos, a bronze giant who tossed large rocks at them.

And Talos, the man of bronze, as he broke off rocks from the hard cliff, stayed them from fastening hawsers to the shore, when they came to the roadstead of Dicte’s haven. He was of the stock of bronze, of the men sprung from ash-trees, the last left among the sons of the gods and the son of Cronos gave him to Europa to be the warder of Crete and to stride round the island thrice a day with his feet of bronze. Now in all the rest of his body and limbs was he fashioned of bronze and invulnerable but beneath the sinew by his ankle was a blood-red vein and this, with its issues of life and death, was covered by a thin skin. (ll. 1638-1648)

Medea decided to take on Talos, for as long as he was not immortal (ie a god), her magic would be just as powerful as his and she could win. Medea then proceeds to channel her hatred into a deadly weapon and attack from a distance to beat Talos.

Thus she spake and they drew the ship out of range, resting on their oars, waiting to see what plan unlooked for she would bring to pass and she, holding the fold of her purple robe over her cheeks on each side, mounted on the deck and Aeson’s son took her hand in his and guided her way along the thwarts. And with songs did she propitiate and invoke the Death- spirits, devourers of life, the swift hounds of Hades, who, hovering through all the air, swoop down on the living. Kneeling in supplication, thrice she called on them with songs, and thrice with prayers and, shaping her soul to mischief, with her hostile glance she bewitched the eyes of Talos, the man of bronze and her teeth gnashed bitter wrath against him, and she sent forth baneful phantoms in the frenzy of her rage. Father Zeus, surely great wonder rises in my mind, seeing that dire destruction meets us not from disease and wounds alone, but lo! even from afar, may be, it tortures us! (ll. 1659-1676)

In the Medea legend told by Apollonius of Rhodes and Euripides, when Jason and Medea return to Pelias’ kingdom, Pelias refuses to honor his oath and give Jason the kingdom. Angered, Medea tricks Pelias’ daughters that if they were to boil their father in water that contained magical herbs, he’d become young again. Secretly, Medea gives the girls the wrong herbs and they end up killing Pelias. This angers the people of Pelias, who then drive Jason and Medea out of the land, and finally to Corinth, where Medea bears two children. In the meantime, the King of Corinth, Creon, decides to offer his daughter, Creusa, in marriage to Jason. He accepts, much to the anger of Medea. Hurt by Jason’s betrayal, she vows to hurt him deeply and as a wedding present, she uses her magic to kill Creon and Creusa. She then kills both of Jason’s children and flees to Athens.

Ovid was fascinated by Media and wrote an epic tragedy about her that many considered to be his greatest work. Unfortunately, that work is lost to us. He also writes of her powers in his Metamorphoses. Ovid describes Medea as a powerful sorcerer that can invoke the powers of darkness – the Night, Hecate, the Underworld. He recounts a number of Media’s deeds. This excerpt tells of Medea fleeing after she had killed Jason’s bride and killed their sons.

At last, the dragon’s wings brought her to Corinth, the ancient Ephyre, and its Pirenian spring. Here, tradition says, that in earliest times, human bodies sprang from fungi, swollen by rain. After Jason’s new bride Glauce had been consumed by the fires of vengeful Colchian witchcraft and both the Isthmus’s gulfs had witnessed flame consuming the king’s palace, Medea impiously bathed her sword in the blood of their sons. Then, after performing this evil act, she fled from Jason’s wrath. Carried by her dragons that are born of the Titans, she reached Pallas’s citadel of Athens. This once knew you Phene, the most righteous, and you old Periphas, both flying in the air, as birds, the eagle and the osprey: and Alcyone, granddaughter of Polypemon, resting on strange new wings. It was Aegeus who gave Medea sanctuary there, damned thereafter by that one action: and not content with taking her in, he even entered into a contract of marriage with her.

Seneca (5 BCE- 65 CE) composed another story about Medea in which she is presented as a witch with a number of demonic subordinates. She is able to invoke various deities to curse her enemies and, feeling betrayed by Jason, she vows to hurt him as deeply as she can. She can also make elaborate concoctions and magical potions.