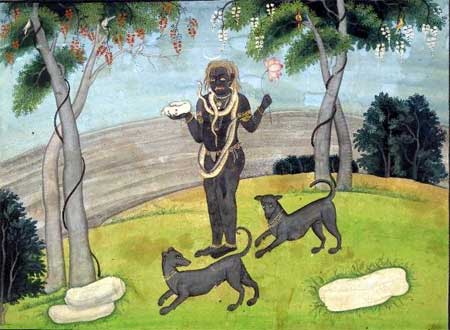 Bhairava is the "terrible" aspect of Shiva. According to the Puranas, it was this aspect that severed Brahman's fifth head.

Disclaimer: In response to numerous emails, I personally wouldn’t classify Bhairava (and certainly not Shiva) as a ‘demon.’ However, demonologist Collin de Plancy, who I cover extensively on this site, did back in his day. I tried to be fair and include descriptions from the Puranas/other Hindu literature to balance what he wrote, but I can’t change the fact that he included Bhairava in his list. If you’re still offended, you can read my response to angry emails I’ve received concerning this.

Bhairava in the Puranas

Bhairava is the “terrible” aspect of Shiva. According to the Puranas, it was this aspect that severed Brahman’s fifth head.

Shiva created a blazing Bhairava in human form, addressing this Kalabhairava as “Lord of Time-Death” (kala) for he shone like the god of Death: “You are called Bhairava because you are of terrifying features and are capable of supporting the universe. You are called Kala-Bhairava, for even Time-Death is terrified of you.” He ordered him to chastise Brahma, promising him in return eternal suzerainty over his city of Kashi (Varanasi), the cremation-ground of the Hindu universe, where final emancipation is assured. In a trice, Bhairava ripped off Brahma’s guilty head with the nail of his left thumb. Seeing this, the terrified Vishnu eulogized Shiva and devotedly recited his sacred hymns, followed in this by the repentant Brahma. Thereby they gained his protection by realizing and acknowledging the supreme reality of Shiva. The severed head immediately stuck to Bhairava’s hand, where it remained in the form of the skull, destined to serve as his insatiable begging-bowl.
– Origin-myth of the Brahmanicide Bhairava

Dictionnaire Infernal – Collin de Plancy (1863) (paraphrased)
Beyrevra is an India demon with long and crooked nails. He watches over the souls who wander in the changed space of the aerial demons. It is said that when Brahma had insulted a superior god, Beyrevra punished him by cutting off one of his heads with his nail. This humiliated Brahma, who then asked the god Eswara for forgiveness & was promised that he would be no less respected with 4 heads than he was with 5.