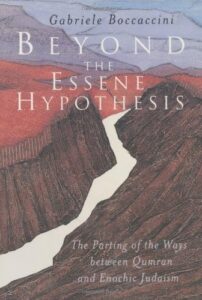 Boccaccini begins his book with a historiographical analysis of the Essene community by comparing writings about the Essenes by early Jewish/Christian (Josephus, Philo, and Hippolytus) and non-Jewish (Pliny the Elder and Dio of Prusa) sources.

After having established differences in the representation of the Essene community by the early sources, Boccaccini analyzes Qumran literature to explain a possible cause of the movement. He begins by presenting the fundamental principles of Qumran belief – cosmic dualism between good and evil, the omnipotence of God and the idea that everything has been predetermined by God, the identification of impurity with evil, and the idea that the community must live in isolation from the rest of humankind.

He then gives a historical account of the schism between the Zadokites and their opposition party, the Enochians, which he believes, emerged in the fourth or third century BCE. While the Zadokites believed in the responsibility of humanity and tried to separate itself from demonic forces influencing the earth, the Enochic Jews believed that it was the fall of a group of angels that brought evil into the world. Because of this, humans cannot control the spread of evil and impurity in the world and therefore are victims of evil, although they are still held accountable for their own actions. Also, while the Zadokites recognized the legitimacy of the second temple and believed that God’s order had been fully restored with its construction, the Enochians believed that the restoration of God’s order was still a future event.

To present his case, Boccaccini analyzes many of the texts found at Qumran and attempts to place them in a historical context. Ezekiel, Boccaccini believes, is a starting point for analyzing pre-Maccabean Enochic literature. While Ezekiel was prominently considered a Zadokite text, it inspired such apocalyptic writings from the Enochic party as the Book of the Watchers, Aramaic Levi, and the Astronomical Book.

During what Boccaccini considers the formative age of the DSS community or the period during the Maccabean revolt after the death of the last legitimate Zadokite high priest, Onias III, the book of Dream Visions (1 Enoch 83-90) and Daniel were written. While the two texts share a common apocalyptic worldview, Dream Visions contains many anti-Zadokite references in connection with previous Enochic literature, while Daniel strongly defends the principles of Zadokite literature such as the Mosaic Torah and the legitimacy of the second temple while opposing the Enochic doctrine of evil. However, Daniel also contains anti-Zadokite elements such as the period of the second temple was still a period of exile and punishment for the Jews that would only end by the intervention of God. Boccaccini believes this element was what made Daniel popular at Qumran, and he theorizes that Daniel was read in light of Dream Visions, not vice versa.

The Book of Jubilees was believed to have been written after the Maccabean revolt. Though it mentions that it was given to Moses, it still gives great importance to Enoch. Boccaccini believes this signifies that after the Maccabean revolt, the Enochians no longer saw the Mosaic revelation of the Zadokites as being a rival revelation. Therefore, the Enochians tried to integrate the importance of Moses into their tradition, which was easier to accomplish now because Daniel provided a path to harmonize the two traditions, and later sparked pseudo-Zadokite works such as the Temple Scroll, the Proto-Epistle of Enoch, and the Halakhic Letter.

After providing an account of Enochic Judaism up to this point, Boccaccini hypothesizes that the Qumran community originally was a separatist movement within Enochic Judaism. He refers to the Damascus Document as the text that directly pre-dates the Qumran sectarian literature and the point at which the Qumran community broke away from mainstream Enochic Judaism. After the Maccabean revolt, the Enochians emerged as victorious over the Zadokites and sparked a movement headed by the Teacher of Righteousness that required stricter purity for the chosen people. This movement then tried to gain control of the Enochic party. However, Boccaccini believes that the mainstream Enochians were not ready to completely part from the rest of Israel and thus opposed this movement, as evidence of later Enochic/ anti-Qumran texts such as the Epistle of Enoch, the Testament of the Twelve Patriarchs, and the Similitudes of Enoch provide. He believes this is why these texts and texts reflecting the views of the Hasmoneans were not found at Qumran, yet are similar to Qumran literature and share common sources. The Teacher of Righteousness not only met with hostility from outside his community, but also within (the house of Peleg), and because of this, the movement decided to separate from the mainstream movement.