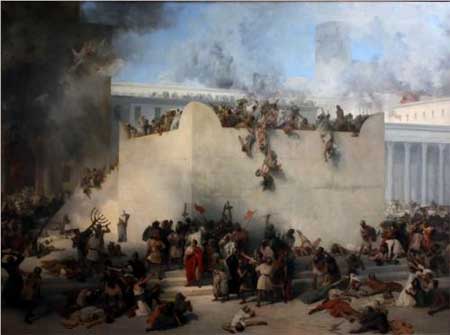 Here's a brief history of Judaism from Antiquity to the Destruction of the Second Temple in 70CE.

The First Temple was constructed during the reign of David’s son, Solomon, and completed in 957 BC. It was built as an abode for the Ark and as a place for the entire people. The building itself, therefore, was not large, but the courtyard was extensive. The Temple is sometimes seen as the earthly antitype to a heavenly archetype. YHWH’s presence in His Temple does not diminish His presence in the heavens. The Temple is the objective correlative of the paradoxical doctrine of God’s simultaneous otherness and omnipresence (cf. Psalm 11:4)

The temple fell in 587 BCE to the Babylonians, and the Jews went into exile. During the Exile, the Ark was kept in the Tent of Meeting described in 1 Kings 8:4 and Exod 29:42-46. The Tent was viewed as a vehicle for communication with God and as a visible relationship between God and Israel.

In 538 BC, Cyrus II, founder of the Achaemenian dynasty of Persia and conqueror of Babylonia issued an order allowing exiled Jews to return to Jerusalem and rebuild the Temple. Work was completed in 515 BC, and thus began what is known as the Second Temple Period.

Before the Israelites were exiled in 586 BCE, they considered themselves a nationality, but afterwards, they became the Jews of the religion, Judaism. There were no conversions before 586 BCE, and there was little prayer. Most of the acts were ritualistic. The Israelites concentrated on the events of “this world,” while the Jews were more concerned with the “world to come.” Israelites had prophets that spoke the word of God, while after 586, the Bible becomes canonized and people concentrate on text.

During the Persian and Hellenistic (4th-3rd century BC) periods, the Temple generally was respected, and in part subsidized, by Judaea’s foreign rulers. From 539 – 333 BCE, the Persions ruled. In 333 BCE, Alexander the Great conquers Pallestine and thus begins the Hellenistic Period of Judaism.

Antiochus IV Epiphanes, however, plundered it in 169 BC and desecrated it in 167 BC by commanding that sacrifices be made to Zeus on an altar built for him. This final act touched off the Hasmonean revolt, during which Judas Maccabaeus cleansed and rededicated the Temple.

During the Roman conquest (63 BC), Pompey entered the Holy of Holies but left the Temple intact. In 54 BC, however, Crassus plundered the Temple treasury. Of major importance was the rebuilding of the Second Temple begun by Herod the Great, king (37 BC-AD 4) of Judaea. Construction began in 20 BC and lasted for 46 years.

The Herodian Temple again became the center of Israelite life. It was not only the focus of religious ritual but also the repository of the Holy Scriptures and other national literature and the meeting place of the Sanhedrin, the highest court of Jewish law during the Roman period.

Destruction of the Second Temple

The rebellion against Rome that began in 66 AD soon focused on the Temple and effectively ended with the Temple’s destruction in 70 AD by the emperor, Vespasian.

Quick Introduction to Gnosticism
Next Post: Jewish Sects of Antiquity